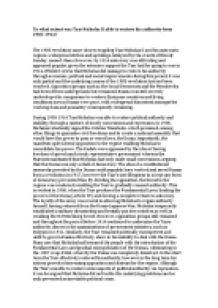 To what extent was Tsar Nicholas II able to restore his authority from 1905-1914?

﻿To what extent was Tsar Nicholas II able to restore his authority from 1905-1914? The 1905 revolution came close to toppling Tsar Nicholas II and his autocratic regime; widespread strikes and uprisings catalysed by the events of b****y Sunday, caused chaos. However, by 1914 autocracy was still ruling and appeared popular, given the extensive support the Tsar had for going to war in 1914. Whilst it is true that Nicholas did manage to restore his authority through economic, political and social improvements during this period, it was only partial and the underlying causes of the 1905 revolution had not been resolved. Opposition groups such as the Social Democrats and the Mensheviks had been driven underground, but remained. Russia was still severely undeveloped in comparison to western European countries and living conditions across Russia were poor, with widespread discontent amongst the working class and peasantry consequently remaining. During 1905-1914 Tsar Nicholas was able to restore political authority and stability, through a mixture of timely concessions and repression. In 1905, Nicholas reluctantly signed the October Manifesto, which promised, among other things to guarantee civil freedoms and to create a national assembly that would have the power to pass or reject laws, the Duma. ...read more.

Although the Tsar was able to restore some aspects of political authority via repression, it can be argued that Nicholas did not tackle the underlying problems and so only prevented an inevitable political crisis. Economically Russia continued to boom throughout the years leading up to the First World War. Coal production increased from 8million tonnes in 1890 to 90million tonnes in 1913. Coal along with other industries such as iron and agriculture grew rapidly. It can be argued that the modernisation of Russia and the rapid expansion of cities and urban areas, acted as a catalyst for the growth of opposition and revolutionary ideals due the increased density in population and poor working and conditions in cities, hostility to the Tsar grew. However, despite this growth, Russia was unable to go through substantial economic change; growth was from a low base and industrialisation was difficult due to the economy being largely state owned. This is partially Nicholas? fault due to his inability to politically modernise Russia, in such a way demonstrated by western European countries. ...read more.

Although social conditions in across Russia showed some signs of improvement, the reforms only scratched the rhino?s back; there was still widespread discontent and strikes. This attitude is shown in the Lena Goldfields Massacre 1912, where over 2,500 miners went on strike due to low wages and poor working conditions, troops opened fire killing over 150 miners. News of the massacre provoked nationwide strikes and protest meetings totalling more than 300,000 participants, with 700 political strikes during the month of April, and 1,000 strikes on 1 May in the St. Petersburg area alone. Stolypin sought to create a strong conservative peasantry who would support the current regime, therefore returning authority to the Tsar. This was called Stolypin?s ?wager on the strong?. He made it possible for ex-serfs to buy themselves out of the peasant commune and for small strips to be consolidated into capitalist farms, aided by loans from the Peasant Land Bank. About two million households (about one-eighth of the total) took advantage of these arrangements before 1916, many moving into the less populated Siberia and Central Asia. In the towns and cities, government reforms were improving working conditions and education, however they were only scratching the surface of the problems facing the working class. ...read more.