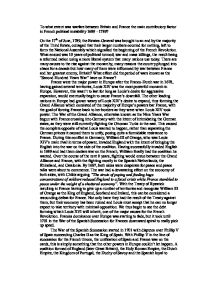 To what extent was warfare between Britain and France the main contributory factor in French political instability 1689 - 1789?

To what extent was warfare between Britain and France the main contributory factor in French political instability 1689 - 1789? On the 17th of June, 1789, the Estates-General was brought to an end by the majority of the Third Estate, outraged that their larger numbers counted for nothing, left to form the National Assembly which signalled the beginning of the French Revolution. What ensued was 10 years of political turmoil, war and mass killings, the result being a reformed nation using a more liberal system that many nations use today. There are many causes to the rise against the monarchy, many reasons the country plunged into chaos for a decade but how many of them were influenced by war between France and her greatest enemy, Britain? What effect did the period of wars known as the "Second Hundred Years War" have on France? France were the major power in Europe after the Franco-Dutch war in 1678, having gained several territories, Louis XIV was the most powerful monarch in Europe. However, this wasn't to last for long as Louis's desire for aggressive expansion, would eventually begin to cause France's downfall. The other leading nations in Europe had grown weary of Louis XIV's desire to expand, thus forming the Grand Alliance which consisted of the majority of Europe's powers bar France, with the goal of forcing France back to her borders as they were when Louis XIV took power. The War of the Grand Alliance, otherwise known as the Nine Years War begun with France crossing into Germany with the intent of intimidating the German states, as they were still currently fighting the Ottoman Turks in the east. ...read more.

The war was finally concluded through the Treaty of Aix-La-Chapelle, where the main points were; Austria recognized Frederick II of Prussia's conquest of Silesia, as well as renouncing parts of its Italian territories to Spain and France had to withdraw from the Netherlands in order for some of the colonies lost to Britain, to be returned. Overall the treaty was disappointing for both Britain and France, in particular France, who went into that war with the aim of expanded her empire when in fact she game out worse have funded 8 years of war and gaining nothing. Perhaps both nations were so eager to conclude negotiations with Prussia benefiting the most, is both nations were trying to become the ally of this swiftly rising power. Prussia who had been slowly growing over the years had become one of the worlds leading nations, with France and Britain constantly at war against each other, Prussia was going to be a vital ally for future conflicts and that she proved to be. The next conflict that carried the Anglo-French hostilities into it was the Seven Years War, which ran from 1756 to 1763 and is regarded as the first truly global conflict. Engagements during the war were mainly fought in Europe but there was a large amount of fighting in North America also (known as the French-Indian war), along with fighting in India (Third Carnatic War) and West Africa. The large scale of this conflict, spread across so many different theatres, required absolute commitment from each and every combatant, countries such as Prussia for example were fighting for their very survival as a nation. ...read more.

What made this even worse for the lower classes of France was that a lot of the aristocrats and clergy were exempt from many of the taxes, they also indulged in many unnecessary luxuries while the rest of France was starving, causing some resentment from the people. Another reason for the French political instability was the age of enlightenment which was sweeping across the globe at the time. The enlightenment was an era where people started to question their position in society and the authority above them. With people starting to realise their abused position in absolute monarchies such as France, a revolution was inevitable. The conflict between France and Britain in the American War for Independence would have brought attention to the revolution by the American people against their British masters, if the Americans could take out the vast British army then surely they could do it here in France. In conclusion, there is no doubt that the wars between France and Britain had a massive impact on the political instability that plagued the French throughout the 18th century. The British had several decisive battles over the French that not only crippled them with debt and territorial loss, but they showed France how successful a parliament was in comparison to a monarch. However, not all the reasons directly have a correlation with the conflicts of both nations. For example the age of enlightenment was a movement that spread across Europe around the same period in history, however it can still be linked back to the British and French fighting in North America, with the enlightenment igniting the American Revolution. ...read more.

There are some examples of useful analysis here but the vast majority of this essay is a narrative account of the conflicts between Britain and France and does not therefore address the question.