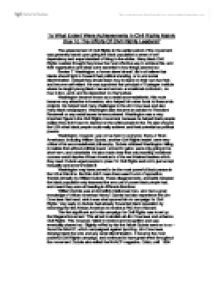 To What Extent Were Achievements In Civil Rights Mainly Due To The Efforts Of Civil Rights Leaders? The advancement of Civil Rights in the earlier period of the movement was generally based upon giving the black population a sense of self dependency and equal standard of living to the whites. Many black Civil Rights Leaders thought they knew the most effective way to achieve this, and their organisation and ideas were essential to how things panned out. Booker T. Washington, a former slave himself, did not believe that blacks should fight to forward their political standing, or to end social discrimination. Instead they should learn how to stand on their own two feet, and become self reliant. He was appointed first principal of Tuskegee Institute where he taught young black men and women a vocational curriculum, on how to live, work, and be dependent on themselves. Washington became known as a racial accomadationist, this route became very attractive to investors, who helped him raise funds to finance his projects. He helped fund many challenges to the Jim Crow laws and also many black newspapers. ...read more.

It became the most powerful Civil Rights campaign, and continued to have great effect throughout the movement. Dubois also edited the NAACP magazine, Crisis, until 1934. This became incredibly popular and proved to be a great way to spread the views and aims of the movement. Dubois left Crisis in 1934 but still continued to play a valuable role in the NAACP, including representing them at the San Francisco Conference, which founded the United Nations. Dubois, like Washington, was a great example of the political and educational potential of black people. He showed the white population that black people could be just as academic and powerful as them. Dubois did however receive much criticism about his support of the involvement in WWI, which many African Americans disagreed with. Dubois also became very critical of Marcus Garvey, calling him a 'lunatic or traitor'. In return Garvey accused Dubois as being 'a white man's n****r'. These petty disagreements again split the African American movement, and gave a reputation as not knowing what they want. Marcus Garvey was very much inspired by Washington, and had made plans himself to start a school, much like the Tuskegee Institute. ...read more.

This was incredibly effective at the beginning of its existence and showed the public that the Government was willing to help the black population. The Reconstruction Acts, which eventually forced the acceptance of the 14th Amendment upon southern states, were another example of this. They threatened martial law and supervised voting unless Southern states incorporated the 14th Amendment into their law. The 15Th Amendment followed on which gave all blacks the vote. These laws however changed legislature, but didn't manage to change how things actually panned out. For example, many blacks never got to vote because of the harsh entrance tests they had to be put through. It seemed the Government tried to help, but in some instances these laws were just decoration, and not actually intending on helping the black people. So, in these earlier years of the Civil Rights movement, black advancement wasn't extremely fast. It was however very hard to change the social and political views of people, who hadn't ever known any different. The Civil Rights leaders raised a lot of awareness within the black and white communities of the potential of the black man, and the different ways they could improve their lives. Sadly, the disagreements, and completely different strategies of the leaders hindered progress considerably, they needed to all aim for the same goal. ...read more.