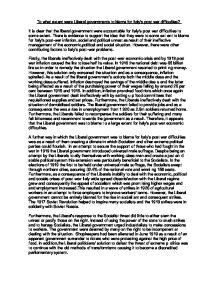 To what extent were Liberal governments to blame for Italys post war difficulties?

To what extent were Liberal governments to blame for Italy's post war difficulties? It is clear that the liberal government were accountable for Italy's post war difficulties to some extent. There is evidence to support the idea that they were to some extent to blame for Italy's post-war inflation, social and political unrest as result of their ineffective management of the economic,political and social situation. However, there were other contributing factors to Italy's post-war problems. Firstly, the liberals ineffectively dealt with the post-war economic crisis and by 1919 post war inflation caused the lira to lose half its value. In 1918 the national debt was 85 billion lire so in order to remedy the situation the Liberal government resorted to printing money. However, this solution only worsened the situation and as a consequence, inflation spiralled. As a result of the liberal government's actions both the middle class and the working class suffered. Inflation destroyed the savings of the middle class and the latter being affected as a result of the purchasing power of their wages falling by around 25 per cent between 1915 and 1918. ...read more.

In the elections of 1919 the first to be held under universal male suffrage, the Socialists swept through northern cities, securing 32.4% of the national vote and winning 156 seats. Furthermore, as a consequence of the Liberals inability to deal with the economic, political and socials crises of post-war Italy wide spread dissatisfaction with the Liberal regime grew and consequently the appeal of socialism which was promising higher wages and and employment increased.This resulted in a wave of strikes in 1920 of agricultural workers in an attempt to force employers to improve workers' terms. However, the Liberal government cannot be entirely blamed for the rise in socialism and consequent strikes. The 1917 Soviet Revolution helped to inspire many socialists and the 1919 strikes were in solidarity with Soviet Russia. Furthermore, the Liberal's response to the Socialist threat did little to either stem the unrest or pacify those on the right. Instead of using the power of the state to crush strikes and to harass Socialists, the Liberal government urged industrialists to make concessions to workers. ...read more.

However, this cannot be entirely attributed to the Liberal regime as it was also following a general pattern in Europe at the time. Though, once socialism had established itself the Liberal's ineffectively dealt with the threat, instead of offering Liberalism as a credible alternative they alienated both the left and the right and returned to its transformismo politics causing it to become a discredited political party. Robson-pages 17-22 Heinemann- Pages 15-22 H+H pages 26-30 Strikes Unemployment Society Political Economy 2. Between the years of 1870 to 1922 there were 29 Prime Ministers in Italy reflecting a rapid turnover of governments, rendering them inefficient in improving the situation both economically and socially. 3. 4. The war created economic and social problems that Italy could not recover from, and for which the Liberal government took the brunt of the blame.The Liberals failed to recompense the soldiers for their suffering and many felt bitterness and resentment towards the government as a result. The Liberal governments failed to address the vast social issues of the day, to overhaul the "transformismo" approach to politics,to improve the economy or to defeat Socialism, thereby creating an environment in which Fascism could flourish. ...read more.