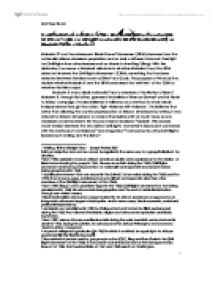 To what extent were Malcolm X and the subsequent Black Power Movement the 'Evil Twin' of the Civil Rights Movement in the late twentieth century in the United States of America?

To what extent were Malcolm X and the subsequent Black Power Movement the 'Evil Twin'1 of the Civil Rights Movement in the late twentieth century in the United States of America? Malcolm X2 and the subsequent Black Power3 Movement (BPM) stemmed from the nationalist African American population and so took a different stance in their fight for Civil Rights than other leaders such as Martin Luther King4 (King). With this distinction, has come a historical debate into whether Malcolm X and the BPM aided or hindered the Civil Rights Movement (CRM); something that has been debated between historians such as Sitkoff and Cook. The purpose of this study is to decide whether Malcolm X and the BPM are indeed the 'evil twin' of the CRM or whether this title is unjust. Malcolm X was a black nationalist5 and a member of the Nation of Islam6. Malcolm X, through his father, garnered the beliefs of Marcus Garvey7 and his 'Back to Africa' campaign. He also believed in militancy as a method to attain black independence through the notion; 'fight violence with violence'. He believed that rather than allowing the continual persecution of African Americans by whites, it was rational for African Americans to defend themselves with as much force as was necessary as advocated in his 'by any means necessary'8 speech. This caused much tension between the two distinct civil rights movements because it contrasted with the methods of nonviolence9 and integration10 advocated by other Civil Rights leaders such as King and the SCLC11. The BPM can lend much of its ideologies to the early ideas of Malcolm X and his militant approach. Black Power grew from the unrest in Northern cities that had not been tackled by other Civil Rights leaders - only Southern, de facto segregation was an aim. King, a Southerner himself, had been involved in Civil Rights issues, primarily in the South, such as removing racial discrimination in states such as Georgia, Alabama and Mississippi in instances such as the Freedom Rides12 and the Mississippi Freedom Summer13. ...read more.

The assassination caused further recoil within the African American community and can also be seen as a major cause of the growing militancy within the movement. By fighting poverty in the ghettos, the BPM achieved much compared to previous groups in the CRM and so, because of its achievements, should not be considered the 'evil twin' of the movement. One major problem with the BPM was that it extricated all whites from various movements primarily CORE and the SNCC which meant that working with whites in order to improve the situation was not possible. King stated that it "tended to...alienate whites from the movement."49 Malcolm X, upon his return from Mecca, had a change of heart in his views in that "he argued that blacks and whites should struggle to overcome the oppression of racism".50 With his assassination51 however, tensions grew even further within the CRM and militancy increased. The movement not only extricated whites from the CRM, but it also led to a division between groups. Groups such as the SCLC and the NAACP were not able to work with the more radical groups such as the SNCC, CORE and more explicitly, the Black Panther Party because they went against what they had strived for in the past. The movement was also seen more as a slogan by some, rather than one group with one particular aim which made it difficult for some to understand what African Americans were actually aiming for. For Cook, it was "more slogan than concept"52 since it never had a true definition and was open to interpretation by conservatives and extremists alike; because of this, it gained support from all activists of the political spectrum. Further criticism of the message of Black Power is that for some, such as Roy Wilkins, it was a message of Black Supremacy which was no better than White Supremacy. [Black Power was]"the father of hatred and the mother of violence...a reverse Mississippi, a reverse Hitler, a reverse Ku Klux Klan53" that "can ...read more.

This candidate has answered the question no doubt, and has explored the role of Malcolm X and how he compares to other leaders in the movement (MLK, Marcus Garvey etc). However, to improve their response further, I would advise ...

This candidate has answered the question no doubt, and has explored the role of Malcolm X and how he compares to other leaders in the movement (MLK, Marcus Garvey etc). However, to improve their response further, I would advise a more concise and structured response. For example, the word length is high and would be difficult to match in exam conditions.

With a lengthy essay such as this, one would expect detailed analysis and this is no exception. As is advised, evaluating the long and short-term impact of various factors whilst reaching a clear judgement on each proves effective. I would suggest a more concise essay structure which could be used in an examination however, with distinct 'mini' conclusions so to speak.

Spelling, grammar and punctuation all sound besides the occassional typo (re-read!). A solid essay with good knowledge however a more concise structure would be advised.