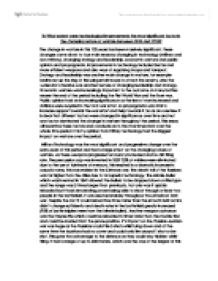 To What extent were technological improvements the most significant factor in the changing nature of warfare between 1815 and 1918? The change in warfare in this 100 years has been massively significant, these changes come down to four main reasons; changing in technology (military and non military), changing strategy and leadership, economic warfare and public opinion and propaganda. Improvements in technology included better and more efficient weapons and also ways of supplying troops and transport. Strategy and leadership was another main change in warfare, for example Molkte set up the ring of fire using small troops to attach the enemy. Also the Ludendorf offensive was another feature of changing leadership and strategy. Economic warfare was increasingly important to the outcome of many battles nearer the end of the period including the First World War and the Boer war. Public opinion had an increasing significance as the size of wars increased and civilians were required in the total war effort, so propaganda was vital to increase support towards the war effort and help towards it. So as an overview it is clear that different factors were changed in significance over time and not one factor dominated the change in warfare throughout the period. This essay will examine these factors and conclude as to the most important over the whole time period. It is my opinion that military technology had the biggest impact on warfare over the period. Military Technology was the most significant and progressive change over the early years of this period and had a large effect on the changing nature of warfare. As these weapons progressed accuracy increased and so did firing rate. The percussion cap was invented in 1839 20% of misfires were eliminated due to the use of fulminate of mercury, this resulted in a dramatic increase in casualty rates, this was evident in the Crimean war. The death toll of the Russians was far higher than the allies due to far superior technology. ...read more.

So directly on the battlefield there was little improvement and this new technology didn't have much impact on the result of a battle. The main impact it had was on the people at home not in the war, as officer's tactics and the amount of people killed was shown publicly in newspapers. This resulted in leaders starting to think about human life as moral and recruitment was critical to the success of an army, so the telegraphs could have helped reform tactics of the leaders but in fact censorship came about and the lies began. British officer in Crimea: 'The confounded telegraph has ruined everything.'5 Telegraphs were new and many leaders found them confusing, and that they didn't end up aiding a battle but hindering it: 'Telegraphs often appeared to do no more than confuse both sides.'6 This shows how telegraphs and printing press were actually a hindrance to warfare and wasn't a significant change but ended up causing confusion. The most important non-military piece of technology was by far the train and railway systems. For obvious reasons they allowed the faster movement of troops, the deployed troops would be fresh and ready to die, the sick and wounded could be cleared quickly and more men could be at a battle in total. Munitions and food could also be carried by train, this helped prevent starvation and running out of arms at the battle. In the Franco-Prussian war a French army of 120,000 was transported to Northern Italy in two weeks, without rail it would have taken 2 months. The Austrians had to march three miles a day across difficult terrain to reach the battleground. This technology was a massive change in warfare during the period but when it came down to the battles trains and transport helped carry more troops and weapons/munitions, all of which were needed due to the changing military technology. ...read more.

So long term battles and wars would continue until one countries economy collapsed and the war would then be lost. 'The war god of our times is economic power' 10 this quote confirms my view that the economy was the most important factor near the end of the period, however for the majority of the period economy had little to do with the outcome of battles or the change in warfare. Economic warfare was a direct result of the industrial revolution and new technology. With more efficient and longer ranging weapons and quicker means of transport being introduced battle were lasting longer and involving increasingly more people. So to the question of was it the most significant change over the period the simple answer is no but from 1900 onwards the economy was crucial to success as weapons, soldiers and supplies needed financing. In conclusion it has become clear that there are many factors that have had massive impacts in the change of warfare; for example economic power was increasingly important over the period but more so during world war one. Propeganda and public opinion also became much more important nearer the end of the period as wars increased in length involved civilians and a home effort, however this was not key in the whole period. Therefore technological improvements were the biggest change to warfare over the whole period as nearly all of the wars in this period were won due to the involvement of a new military weapon that the opposition didn't have. 1 John Terraine, The Smoke and the Fire, 1992, pg 132 2 Hilaire Belloc 3 A short History of the war, Richard Gabriel and Karen Metz 4 The development of land warfare, Peter Browning 5 The Victorian Internet, T Standage, 1999, p146 6 The changing nature of warfare, Neil Stewart, 2001, p58 7 The changing nature of warfare, Neil Stewart, 2001, p59 8 British training manual, 1907 9 The Western front, Rosemary Reeds 10 The First World War- Ian Cawood, David McKinnon Bell ?? ?? ?? ?? ...read more.