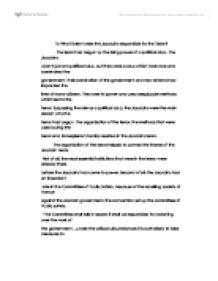 To What Extent were the Jacobins responsible for the Terror?

Another effective law created was the "law of Prairial", which was created in order for the process of trial to speed up. Defense counsels were no longer needed and sentences were meant to be shorter when in trial. It would be either death or they could be discharged. This period of time was known as the "Great Terror." The methods that the Jacobins used when they took over as government resulted in the terror. They used the guillotine as an image of holding supreme power. They terror was meant to help stop the revolution but instead it was known as a helping hand to the revolution. The members who suffered from the guillotine, measured up to over 12,000 citizens. The main citizens that suffered were not merely the first and second society, but were mainly the peasants and the urban workers. The Jacobins used hideous reasons for killing innocent people. An example would be when Marie Plaisant, seamstress, convicted of having exclaimed that she was an aristocrat and that she did not care a fig for the nation, was condemned to death and executed the same day(The Reign of Terror) ...read more.

"Terror is only justice: prompt, severe and inflexible; it is then an emanation of virtue; it is less a distinct principle than a natural consequence of the general principle of democracy, applied to the most pressing wants of the country" (Principles of Political Mortality). The Terror seen through the eyes of citizens meant nothing to Robespierre. Robespierre attacked the Hebertists because of their belief as an anti-Christian. Robespierre as the main leader took advantage. He controlled the Jacobins moves and used methods such as the guillotine to kill people either guilty or non-guilty. He felt that "pity was treason" (Maximilien Robespierre). He felt that getting rid of people who were against his ideas should be executed. Due to this, the Jacobins reacted, which led to the terror. The significance of the organization, the methods that the Jacobins used when they were in control and Robespierre's tactics shows exactly to what extent were the Jacobins responsible for the terror. All the methods that the Jacobins used caused resentment among the citizens of France. So the Jacobins were really responsible for the terror that had completely changed France. ...read more.