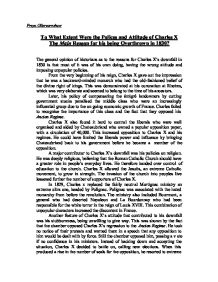 To What Extent Were the Polices and Attitude of Charles X The Main Reason for his being Overthrown in 1830?

Freya Ollerearnshaw To What Extent Were the Polices and Attitude of Charles X The Main Reason for his being Overthrown in 1830? The general opinion of historians as to the reasons for Charles X's downfall in 1830 is that most of it was of his own doing, having the wrong attitude and imposing unpopular policies. From the very beginning of his reign, Charles X gave out the impression that he was a backward-minded monarch who had the old-fashioned belief of the divine right of kings. This was demonstrated at his coronation at Rheims, which was very elaborate and seemed to belong to the time of his ancestors. Later, his policy of compensating the �migr� landowners by cutting government stocks penalised the middle class who were an increasingly influential group due to the on going economic growth of France. Charles failed to recognise the importance of this class and the fact that they opposed his Ancien Regime. ...read more.

Still the chamber opposed him, passing a vote if no confidence in his ministers. Instead of backing down and accepting the situation, Charles X decided to battle on, calling new elections. When this produced a rise in the number of seals for the opposition, he resorted to extreme measures, invoking article XIV of the Charter and passing the four ordinances of St Cloud, which combined virtually, amounted to a coup. However, in addition to Charles X's numerous mistakes, there were also factors that were out of his control which furthered the tension in France and contributed to his eventual end. An economic recession began in France in 1826 with a series of bad harvests causing food shortages. This led to the price of basic food products increasing. In Eastern France, wheat prices alone rose by 66% between the years of 1826 and 1830. Riots began against taxation and grain shortages and unemployment levels soared especially in manufacturing towns. ...read more.

In addition to this, Charles X didn't arrest any of the leaders of the opposition, as this would have weakened their forces. Instead he came having done none of this and with another general who had deserted Napoleon, enraging the rioters further. His own troops went over to the side of the rioters, forcing him to back down. If Charles X had approached the Paris coup differently and taken the necessary precautions highlighted above, his chances of victory would have been very good, regardless of the economic crisis in France. In conclusion, the recession in France did help to cause the fall of Charles X but this alone could not have brought him down. The situation needed something to bring all the tension and discontent of the people to a head. This was Charles X's incompetence and thoughtlessness in enraging the people if Paris with his ordinances then going up against them without the means of victory. It was therefore Charles's attitude and policies that played the larger role in Charles X being overthrown although the economic factors should be taken in consideration. ...read more.