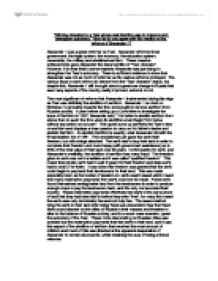 To What Extent Were the Reforms of Alexander II Intended to Preserve and Strengthen Autocracy?

"Window-dressing by a Tsar whose real intention was to preserve and strengthen autocracy." How far do you agree with this verdict on the reforms of Alexander II? Alexander II was a great reformer as Tsar. Alexander reformed local government, the legal system, the economy, the education system, censorship, the military and abolished serfdom. These massive achievements gave Alexander the deserved title of "Tsar Liberator". However, it is clear that in some respects Alexander was just trying to strengthen the Tsar's autocracy. There is sufficient evidence to show that Alexander was not as much of reformer as his various reforms portrayed. The various flaws in each reform do detract from the "Tsar Liberator" status, but despite this, Alexander II still brought about a great sea change in Russia that saw many aspects of the country vastly improved, autocrat or not. The most significant of reforms that Alexander II implemented during his reign as Tsar was definitely the abolition of serfdom. Alexander II carried on Nicholas I's sympathy towards the first, and sought to remove serfdom from Russian society. A year before setting up a Committee to investigate the issue of Serfdom in 1857, Alexander said, "It is better to abolish serfdom from above than to await the time when its abolition would begin from below without any action on our part." ...read more.

The reforms were also a genuine move to improve the poor reputation of Russia in terms of human rights and to dispel the image of unjust courts in Russia. Alexander II also chose to meddle very little with the new legal system; once the Tsar appointed new judges it was incredibly difficult to remove them. This aspect was highlighted in the Vera Zasulich case were a women revolutionary attempted to assassinate the mayor of St Petersburg. Zasulich was found not guilty by a jury in case that could have seen the Tsar interfere, but instead Alexander stuck true to his reforms and let the case proceed as usual. This was a sign that Alexander wanted the Russian legal system to move forward and to modernise Russia. However, like all his reforms the legal reforms had their flaws. The serfs and peasants were only allowed to be tried by the Mir courts, so 83% of Russia's population had no trial by jury available to them. This aspect was incredibly unjust from the serfs and detracted from largely liberal reform. A possible reason why serfs were not allowed trail by jury was that if Alexander granted them this, he could risk further angering the nobles who now had to go through for complex legal procedures than before and could not bribe officials as had previous been the case. ...read more.

There were vast reforms in financial control, taxation and new sources of income were exploited. Annual budgets were also published and the economy was definitely starting to get back on its feet. Alexander II did not have much to gain in terms of strengthening his power over Russia, it was clear that Alexander had to reform the economy in order for this many other reforms to function fully. Despite the reform of the economy, inflation worsened and national debt rose due to the Russo-Turkish War. In conclusion, Alexander II was without a doubt a great reformer. His vast reforms, which I have spoken about broke Russia out of a previously archaic system. Alexander II also took huge risks with these reforms. With his education reforms being very liberal he risked coming under fire from the new breed of students that his reforms created, the same was the case with the new breed of lawyers that the legal reforms created. This put Alexander's absolute power at risk, but still he was brave enough to push through the reforms for the benefit of Russia. Alexander II did give the serfs a raw deal in many of his reforms, but he did take the crucial first step in their complete liberation and with it left hi mark on Russian society. Like any Monarch, Alexander II was not perfect, but his reforms completely changed the face of Russia and it society, mostly for the better. ...read more.