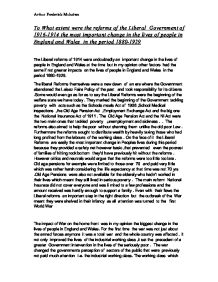 Previously women were limited to performing the traditional roles of mother and housekeeper and the more professional women were secretaries and other similar jobs . Women were never in any position of power and weren't even allowed to vote from 1880 till 1918 . When the war started the working men in Britain left and the hole in industry they left behind had to be filled somehow and that began the changing role of women . Women in work rose from 4.93 million in 1913 to 6million in 1918 . And they weren't just limited to factories jobs but also to Transport ,some joined the armed forces as nurses and clerics . The Munitions act of 1915 was introduced and women began working in the 20 000 munitions factories in Britain . The end of the war saw men changing their perception of women , especially politicians who began considering enfranchising women . They had previously been reluctant too as a result of the sometimes aggressive campaigning of the Suffragettes movement which involved at one point bombing the Chancellor of the Exchequer David Lloyd George's house . He became Prime Minister in 1918 and his coalition government was the first to give women the vote though the criteria required "although it was only women over 30 who occupied premises of a yearly value of not less than �5" that were given the vote" . ...read more.

Over 1 1/2 Million workers went on strike for 9 days but the government which had prepared for this by bringing in 200 000 special constables and the army were called to keep power stations open ,help the police and escort food supplies from the docks .The Government would not budge and in the end on the 12th the TUC called of the unsuccessful strike although the miners refused until November where they returned to lower wages and longer hours .TUC membership fell as a result and the Trade Disputes Act was passed banning future General Strikes .The General strike was unsuccessful and naturally it was not as important as other events during this period as it brought about no real changes than those that were already planned leading up to it . In conclusion the Liberal Reforms were to some extent pivotal in the lives of People in England and Wales during the time 1880-1929 as they brought about a lot of changes in Government policy as did the Decline of Staple industries ,the General Strike and the Changing role of women which all played a part .However as declared by Leon Trosky " War is the locomotive of History" and indeed it was as the First World War bought about the biggest and most influential changes in the lives of people living during this period and it was therefore the most important change in the lives of people in England and Wales in the period 1880-1929 . ?? ?? ?? ?? Arthur Frederick Mubaiwa ...read more.