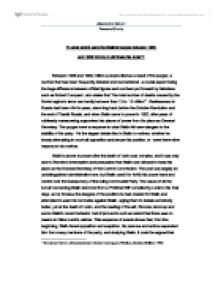 To what extent were the Stalinist purges simply a way of eliminating his rivals?

To what extent were the Stalinist purges between 1928 and 1939 "simply to eliminate his rivals"? Between 1928 and 1939, millions people died as a result of the purges, a number that has been frequently debated and reconsidered, a crucial aspect being the huge difference between official figures and numbers put forward by historians such as Robert Conquest, who states that "the total number of deaths caused by the Soviet regime's terror can hardly be lower than 13 to 15 million"1. Restlessness in Russia had been rife for years, stemming back before the October Revolution and the end of Tsarist Russia, and when Stalin came to power in 1922, after years of ruthlessly maneuvering supporters into places of power from his place as General Secretary. The purges were a response to what Stalin felt were dangers to the stability of the party. Yet the largest debate lies in Stalin's motives; whether he simply attempting to crush all opposition and secure his position, or were there other reasons to his motives. Stalin's ascent to power after the death of Lenin was complex, and it was only due to Zinoviev's interception and persuasion that Stalin was allowed to keep his place as the General Secretary of the Control Commission. The post was largely an undistinguished administrative one, but Stalin used it to fortify his power base and control over the bureaucracy of the ruling Communist Party. The cause of all the tumult concerning Stalin stemmed from a 'Political Will' compiled by Lenin in his final days, as he foresaw the dangers of the position he had created for Stalin and attempted to warn his comrades against Stalin, urging them to instate somebody better, yet at the death of Lenin, and the reading of the will, Zinoviev stood up and swore Stalin's recent behavior had improved to such an extent that there was no reason to follow Lenin's wishes. ...read more.

This gives weight to the argument that Stalin was indeed eliminating his rivals from the Party, as Kirov was arguably a strong competitor against Stalin, and the effectiveness with which it was covered up and made to look as if Stalin had no implication was impressive, suggesting a well thought out plan. It could be argued that Stalin began what later became the purges as simply a demonstration of his power, the initial purge of party members unfortunately gathered momentum, and within a few years people denounced others in order to shift blame from themselves. This provides a solid piece of evidence for the argument against Stalin's reasons for the purge. The intolerance which gripped society in the time of this great change resulted in distrust on all fronts, enemies were seen everywhere; traitors to the revolution, who wanted to ruin the hard work and accomplishments of the New Russia. The denunciation of such key figures as Trotsky as enemies of the state resulted in people drawing the conclusion that if such important dignitaries could betray the nation, then what about the lesser people? This snowballed and quickly hundreds of people were suspected of traitorous acts. Common people were left to draw the distinction between incompetence and intentional sabotage, which consequently led to any mishap that might arise in the workplace to be blamed on sabotage. Denunciations therefore became commonplace, and no one was safe. They became a means of harming your enemies, as well as proving your patriotism, for by identifying a peer as a traitor, it could perhaps protect you from being named as one. For when 'conspirators' were uncovered, it was not uncommon for their wives and relatives to also be punished and apprehended. It seemed as if the only way to protect yourself was to denounce someone else, fuelling the situation within Russia to one of fear and suspicion. The idea has been put forward that keeping people in constant fear of being arrested was a technique for making them do as Stalin wanted, and at its most basic, this is true. ...read more.