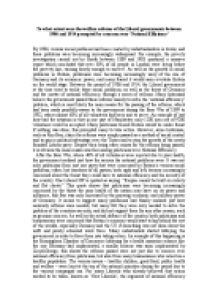 ﻿To what extent were the welfare reforms of the Liberal governments between 1906 and 1914 prompted by concerns over ?National Efficiency? By 1906, various social problems had been created by industrialisation in towns, and these problems were becoming increasingly widespread. For example, the poverty investigation carried out by Booth between 1889 and 1903 produced a massive report which concluded that over 30% of all people in London were living below the poverty line, earning barely enough to survive. As well as the growth in social problems in Britain, politicians were becoming increasingly wary of the rise of Germany and its economic power, and many feared it would soon overtake Britain on the world stage. Between the period of 1906 and 1914, the Liberal government at the time tried to tackle these social problems, as well as the threat of Germany and the matter of national efficiency, through a series of reforms. Many historians believe the government passed these reforms mainly to solve the ?national efficiency? problem, which is most likely the main reason for the passing of the reforms, which had been made painfully aware to the government during the Boer War of 1899 to 1902, where almost 40% of all volunteers had been unit to serve. An example of just how bad the situation is that in one part of Manchester only 1200 men out of 9200 volunteers could be accepted. Many politicians feared Britain would be under threat if nothing was done; this prompted many to take action. However, some historians, such as Roy Hay, claim the reforms were simply passed as a method of social control and to gain a political advantage over the Tories and to stop the growth of the newly founded Labour party. ...read more.

This growth in knowledge of poverty, in turn, led to the rise of a new branch of the Liberal party, who felt something had to be done, both due to genuine concern, and for other reasons, such as the national efficiency argument. They were called the ?New Liberals?. They supported the idea of ?positive freedom? which was the idea that government should allow people to become free by helping them. Churchill sums up the reasoning behind the whole system very well: ?Trade was free. But hunger and squalor and cold were also free and the people demanded something more than liberty.? Here Churchill essentially argues that the current system of laissez-faire was not working, and although the Liberals were providing freedom, in doing so they were actually decreasing the living standards of many people. Churchill argues that government intervention was needed, and as Churchill was a New Liberal, this shows the new ideology was a major reason for the passing of social reform. Further evidence for New Liberalism having a large impact on the passing of reform is that after 1906 the Cabinet mainly consisted of New Liberals, such as Churchill, Lloyd George and Asquith (who was a pupil of one of the first New Liberals ? T.H. Green) who had a direct influence on policy making. The fact that the New Liberals were basically completely in control of policy making in the period shows that the new ideology was a major reason for the passing of reform, however the ideology would not have existed were it not the raised awareness of poverty, which showed politicians laissez-faire was not working. As well as having genuine concern for the masses, though, the New Liberals were also incredibly worried about national efficiency and used this as their main argument to gain support from politicians who had less genuine concern for the people. ...read more.

industrialists that Britain would fall behind the growing powers of Germany and the USA if nothing was done to fix the health problems of the general populace. As well as this there was also concern that Britain would not be able to survive a war with Germany, which seemed like it was going to happen more and more. After the Boer War, where 40% of all volunteers had been unfit, most politicians felt that something definitely had to be done to fix the situation. However, other historians differ in their point of view to this and claim National Efficiency was definitely not the main reason. For example, Roy Hay claims the government passed the reforms simply as a method of social control to prevent the spread of socialism. Although this was most definitely one of the reasons for why they were passed, there is no doubt national efficiency was a more important one, as it is most likely that politicians felt the threat of foreign powers was more immediate than the threat of problems caused from within the actual country. Other historians also argue that many politicians supported the reforms out of genuine concern, and although this was, like the argument of social control, a significant reason for the passing of reform, there were very few politicians in parliament who wanted to help the poor out because of a moral sense of duty, and most were far more concerned by the threat the poor health of the nation posed to its security. Although there is far more than one reason for why the reforms were passed by the Liberal government between 1906 and 1914, such as political motives, there is no doubt that the argument of ?National Efficiency? was the main reason. Words: 2910 ...read more.