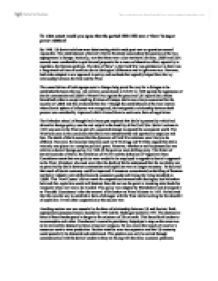 To what extent would you agree that the period 1948-1953 saw a 'thaw' in super power relation? By 1948, US-Soviet relations were deteriorating which made post-war co-operation seemed impossible. The establishment of Soviet's Berlin Blockade consolidated the position of the two superpowers in Europe. Ironically, now that there was a clear territorial division, USSR and USA seemed more comfortable to put forward proposals for a more collaborative effort, especially in regards to the German problem. The idea of 'thaw' in the Cold War was paradoxical as there was a long stretch of time of conflicts due to ideological differences and a tight arms race. However, both sides adopted a new approach in policy and methods that arguably helped thaw the icy relationship between the East and the West. The consolidation of both superpowers in Europe help paved the way for a dialogue to be established between the two. ...read more.

However, whether or not his personality was relative to Soviet foreign policy, by 1948-49 the policies were shifting away. The failure of Soviet blockade of Berlin, the formation of NATO and the defection of Yugoslavia from Cominform meant that new policies were needed to be employed in regards to Soviet's approach to the West. Malenkov who took over after the death of Stalin understood that the inevitable war as perceived by Stalin between communism and capitalism was no longer necessary. He believed that much of Soviet economy could be improved if resources concentrated on building of firearms and heavy industry were shifted towards consumer goods and raising the living standards in USSR. This 'New Course' did not mark the cooperation between both ideologies, but Malenkov believed that capitalism would self-destruct thus did not see the point in investing state funds for weaponry when war was to be avoided. ...read more.

In the period of 1948 to 1953, there was a slight change in the relations of Soviets and the West. Through the consolidation of positions in Europe, both sides felt more comfortable to begin negotiation whereas previously shaky security and sphere of influence led to the abandoning of idea of possible cooperation. The death of Stalin and his failed policies meant that Soviets could take a different approach in regards with the West and this proved possible as Stalin's successors showed more tolerance to the west through the 'Peaceful Coexistence'. Eisenhower and his state secretary Dulles realized the economic hardship internally and was forced to abandon the idea of an arms race, Soviet's resources were limited and felt the economic strains in trying to compete in an arms race with the West. Both overstretching their economic resources, the US and the Soviets felt that a more diplomatic approach on matters was in the interest of both countries. Therefore, it is safe to say that there had been a 'thaw' in super power relation in the period of 1948-1953. ...read more.