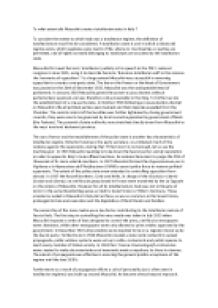 ï»¿To what extent did Mussolini create a totalitarian state in Italy ? To consider the extent to which Italy was a totalitarian regime, the definition of totalitarianism must first be considered. A totalitarian state is one in which a dictatorial regime exists, which regulates every realm of life, where no rival loyalties or parties are permitted, and all rights normally belonging to individuals are assumed by the totalitarian state. Mussolini first used the term 'totalitarian' publicly in his speech to the PNF's national congress in June 1925, using it to describe fascisms 'ferocious totalitarian will' to the remove the 'remnants of opposition'. To a large extent Mussolini was successful in removing opposition to create a one-party state. The law on the Power on the Head of Government was passed on the 24th of December 1925, Mussolini was the undisputable head of parliament. In January 1926 Mussolini gained the power to pass decrees without parliamentary approval and was therefore only answerable to the King. ...read more.

Those arrested or exiled in Mussolini's Italy did not face, as was so common in the Soviet Union, prolonged torture and execution and the liquidation of their friends and families. The censorship of the mass media was a key factor contributing to the totalitarian nature of Fascist Italy. The first step in controlling the mass media was taken in July 1925 when Mussolini imposed a series of laws designed to control the press, anti-fascist newspapers were shutdown, while other newspapers were only allowed to print articles approved by the government. In December 1925 all journalists were required to be on a register drawn up by the fascist party. Furthermore in 1924 Mussolini created a state radio network to spread propaganda, public address systems were set up in cafÃ©s, restaurants and public squares to reach every member of Italian society. In 1924 the Lâ€™Unione Cinematografi ca Educativa were created to make documentaries and newsreels made compulsory to show in cinemas. ...read more.

Furthermore the Church was not the only restraint to Mussolini's power. In 1922 Mussolini accepted office as the King's prime minister and despite the increases in his personal power within the state, even as head of government, he could still be deposed by King Victor Emmanuel. Mussolini was eventually deposed by the King on the 25th of July 1943 following the allies invasion of Sicily. In conclusion the abrupt end of the 'totalitarian' regime under Mussolini suggests that such a totalitarian state never existed. Mussolini summed up the definition of totalitarianism by stating that there is 'everything within the state, nothing outside the state, nothing against the state'. However there were forces outside the control of Mussolini, in 1943 in the prospect of a military defeat, Mussolini was the first challenged in the Fascist Grand Council, then dismissed by the King, and finally arrested and imprisoned. Mussolini's dismissal suggests that the totalitarian regime Mussolini intended to create was never completed. ...read more.