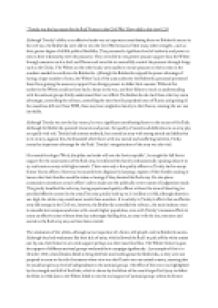 Trotsky was the key reason for the Red Victory in the Civil War How valid is this view?

Ã¯Â»Â¿â€˜ Trotsky was the key reason for the Red Victory in the Civil Warâ€™ How valid is this view? (25) Although Trotskyâ€™s ability as an effective leader was an important contributing factor to Bolshevik success in the civil war, the Bolsheviks were able to win the Civil War because of their many other strengths , such as their greater degree of skilful political flexibility. They possessed a significant level of authority and power as seen in their relationship with the peasantry. They were able to win greater peasant support than the Whites through measures such as the Land Decree and were able to successfully control the peasants through things such as the Cheka. The Whites on the other hand, were unable to recruit peasants to their armies in the numbers needed to overthrow the Bolsheviks. Although the Bolsheviks enjoyed the power advantage of having a larger number of arms, the Whitesâ€™ lack of the same authority the Bolsheviks possessed prevented them from gaining the necessary support from foreign powers to defeat their enemies. Without this authority the Whites could not have had a chance in the war, and their failure to reach an understanding with the national groups fatally undermined their war efforts.The Bolsheviks also had three other key main advantages, controlling the railways, controlling the most heavily populated areas of Russia and gaining all the munitions left over from WWI, these may have weighed so heavily in their favour, winning the war was inevitable. ...read more.

The Whites' failure to gain the support of different national groups weakened their campaign significantly . An example of this is in October 1919, when Denikin failed to bring the Poles into battle against the Bolsheviks, as they were not prepared to come to the aid of someone whose view was that Russia was one united country, meaning that he would not give any level of independence to the national groups. The effect of this error was highlighted by the strength and skill of the Poles, which is shown by the failure of the much larger Red Army to defeat the Poles in 1920. Just as the Whites failed to win the real support of national groups within the former Russian Empire, so they also failed to win the committed support of the foreign powers.Britain and the United States were reluctant to support groups they considered to be supporters of the autocratic Tsar and as a result never sent enough troops to be of much assistance to white efforts. Even more vitally they failed to gain peasant support. Kolchak refused to allow any land seizures except for those of unused land. As a result on the southern and eastern fronts the White regimes failed to recruit a sufficient number of soldiers. In the summer of 1918 they found it very difficult to recruit peasants and could only create an army of 10,000 men. ...read more.

In July and September 1919 the Bolsheviks recruited two million peasants in Orel and Moscow. The Bolsheviks also proved more flexible than the Whites in retaining the peasantry. For example, by 1921 four million peasants had deserted from the Red Army. Between July and 9 the Bolsheviks were able to return 1,426,000 deserters to the army with the promise of no punishment.The Bolsheviks were also much more skilful in dealing with the different national groups.In 1920, the Bolsheviks were prepared to recognise the independence, through a treaty, of Estonia, Latvia and Lithuania in order to have the flexibility to defeat the Whites and to prevent further fronts from emerging. Moreover, in 1919 Lenin demonstrated his flexibility by allowing the Ukrainians to use their own language within the Soviets to prevent a nationalist revolt. Although they were clearly granted massive advantages, without being combined with their skilful political manipulation they may not have been as successful. In conclusion, the key reason for Bolshevik success was their political flexibility, being able to negotiate with the nationalities and the peasants and temporarily granting them their wishes meant they had massive advantages in both numbers and territory. Combined with their far superior resources, territory and transport system, even without the skilful leadership of Trotsky, they had gained an advantage against the whites in every way using political negotiations, their win in the civil war was inevitable. ...read more.