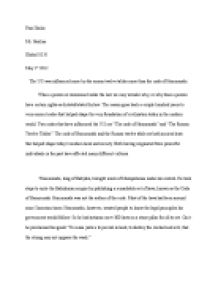 Two legal codes that have influenced the U.S are The code of Hammurabi and The Roman Twelve Tables.

﻿Faiz Shakir Mr. Gosline Global 10 H May 1st 2012 The U.S was influenced more by the roman twelve tables more than the code of Hammurabi. When a person is summoned under the law we may wonder why, or why does a person have certain rights as dictated/stated by law. The reason goes back a couple hundred years to very ancient codes that helped shape the very foundation of civilization today in the modern world. Two codes that have influenced the U.S are ?The code of Hammurabi? and ?The Roman Twelve Tables?. The code of Hammurabi and the Roman twelve table are both ancient laws that helped shape today?s modern laws and society. Both having originated from powerful individuals in the past have affected many different cultures. ?Hammurabi, king of Babylon, brought much of Mesopotamia under his control. He took steps to unite the Babylonian empire by publishing a remarkable set of laws, known as the Code of Hammurabi. Hammurabi was not the author of the code. Most of the laws had been around since Sumerian times. Hammurabi, however, wanted people to know the legal principles his government would follow. ...read more.

In 450 the code was formally posted, likely on bronze tablets, in the Roman Forum. The written recording of the law in the Twelve Tables enabled the plebeians both to become acquainted with the law and to protect themselves against patricians? abuses of power.? < "Law of the Twelve Tables." Encyclopedia Britannica. Encyclopedia Britannica Online. Encyclopedia Britannica Inc., 2012. Web. 23 Apr. 2012.? http://www.britannica.com/EBchecked/topic/610934/Law-of-the-Twelve-Tables>. ?Roman law was based on the concept of JUSTICE and the RIGHTS OF THE INDIVIDUAL. It is from the Romans that we inherited the belief that a man should not be accused anonymously, that he should not be penalized for what he thinks that he should be considered innocent until he is proven guilty. Justice, as defined by the Romans, was the steady and abiding purpose to give every man that which is his own. Remarkably, Rome?s legal system developed in a pagan society in which slave labor was common turned out to be adaptable to the Christian society of the middle Ages, the capitalists of the 17c, and to us today. An important step in the political development of any people is the organization and publication of their laws in a way that makes it possible for all persons to know what the law is. ...read more.

They had only focused on laws to punish the weak social classes and there was very little order in the Mesopotamian society. When the day and age, a person marries someone of a different class, makes choices for themselves, study what they want, work where they want, we should thank the Romans. They built the very foundation of the world we live in today and the society we thrive under. They have given us our civil liberties, our laws, or ways of life our morals. In all entireties, we owe the Romans for our lives today. They have given us the keys to the very foundations of our society today. They are the reason we can live together in a moderately peaceful world and coexist as equals. Although there are numerous other codes the Romans have seemed to be the very basis of our laws today. That is why I believe that the Romans have influenced the U.S a whole lot more than ?The code of Hammurabi.? Faiz Shakir ~first you must have laws placed in society to lay way to a foundation and to protect and thrive so there is no chaos? and that is why the Romans influenced the U.S. ...read more.