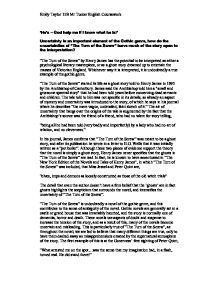 Uncertainty is an important element of the Gothic genre, how do the uncertainties of &quot;The Turn of the Screw&quot; leave much of the story open to the interpretation?

'He's - God help me if I know what he is!' Uncertainty is an important element of the Gothic genre, how do the uncertainties of "The Turn of the Screw" leave much of the story open to the interpretation? "The Turn of the Screw" by Henry James has the potential to be interpreted as either a psychological literary masterpiece, or as a ghost story dreamed up to entertain the masses of Victorian England. Whichever way it is interpreted, it is undoubtedly a true example of the gothic genre. "The Turn of the Screw" started its life as a ghost story told to Henry James in 1895 by the Archbishop of Canterbury. James said the Archbishop told him a "small and gruesome spectral story" that he had been told years before concerning dead servants and children. The tale told to him was not specific in its details, so already an aspect of mystery and uncertainty was introduced to the story, of which he says in his journal where he describes "the mere vague, undetailed, faint sketch of it." The air of uncertainty that hangs over the origins of the tale is augmented by the fact that the Archbishop's source was the friend of a friend, who had no talent for story telling, "being all he had been told (very badly and imperfectly) ...read more.

"...Mrs Grose's dazed blink across to where I pointed struck me as a sovereign sign that she too at last saw..." However, to believe this would be to believe the word of a young woman from a traditionally superstitious background, who is want to fantasies and who holds an unrequited love for her employer, " 'I'm rather easily carried away. I was carried away in London!'" Therefore, although this self-admittance of being "rather easily carried away" throws a heavy cloud of doubt over her claims, there is still an air of uncertainty that is allowed to hover over the existence of the spirits for the entirety of the novel, due to the Governess' certainty that "I was there - I saw with my eyes" and that "They know - it's too monstrous: they know, they know!" The specific language that Henry James employs when describing things that the Governess sees or hears increases the sense of uncertainty in the novel, "...less natural, and not without, but within, that I had fancied I heard. There had been a moment when I believed I recognized, faint and far the cry of a child..." ...read more.

This throws a lot of uncertainty upon his identity, because both of these circumstances would apply for the character of Miles. However, this can be dismissed as either pure coincidence or as Douglas making the tale more real by personalising it. This uncertainty leaves Douglas' identity open to much speculation and personal interpretation, depending on the reader's point of view. I believe that the introduction to "The Turn of the Screw" can be linked to the night when James first had the germ of the tale narrated to him by the Archbishop of Canterbury. Through this theory, the identity of the introduction's narrator can be revealed as being Henry James, but the identity of Douglas still remains unclear. There have been many theories as to the main uncertainty of "The Turn of the Screw", that is the existence of the ghosts, and they all back up their conclusions with substantial evidence from the text. However, it is because of the fact that all of the critics of "The Turn of the Screw" can find evidence as to their sometimes very different theories, which makes the novel so uncertain and inconclusive. It is this ambiguity and mystery that makes "The Turn of the Screw" a principal novel of the Gothic genre. Emily Taylor 11B Mr Tucker English Coursework ...read more.