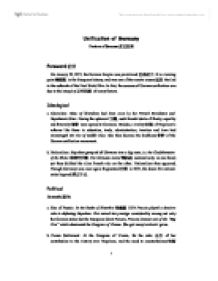 Unification of Germany - Factors of Success.

Unification of Germany Factors of Success???? Foreword?? On January 18, 1871, the German Empire was proclaimed????. It is a turning point??? in the European history, and was one of the remote causes?? that led to the outbreak of the First World War. In fact, the success of German unification was due to the interplay???? of many factors. Ideological a. Liberalism: Ideas of liberalism had been sown by the French Revolution and Napoleonic Wars. During the upheaval??, such French ideals of liberty, equality and fraternity?? were spread to Germans. Besides, a variety?? of Napoleon's reforms like those in education, trade, administration, taxation and laws had encouraged the rise of middle class who then became the backbone?? of the German unification movement. b. Nationalism: Napoleon grouped all Germans into a big state, i.e. the Confederation of the Rhine?????. The Germans tasted??? national unity on one hand; yet they disliked the alien French rule on the other. Nationalism thus appeared. Though Germany was once again fragmented?? in 1815, the desire for national unity lingered????. Political Domestic??: a. Rise of Prussia: In the Battle of Waterloo??? 1814 Prussia played a decisive role in defeating Napoleon. This raised her prestige considerably among not only the German states but the European Great Powers. Prussia became one of the "Big Five" which dominated the Congress of Vienna. ...read more.

Austria's Unsuitability???: Traditionally, since the days of the Holy Roman Empire Austria was the leader of Germany. The Hapsburgs????? were the most prestigious??? rulers. Yet Austria was unsuitable to lead the German unification movement. She was a conglomerate???? empire consisting of various subject peoples. Encouragement of nationalism might inspire?? the subject peoples to demand national independence and even break the empire. And whether or not the Austrian domains?? should be included in a united Germany was often embarrassing?? to German nationalists, which did really happen in the 1848 Revolution. Austria was also being ruled by conservative aristocracy??????. Encouragement of liberalism and industrialization might give rise to the middle class who in turn would ask for power. Hence, Prussia was the only choice left for the German unification movement. b. Decline of Austria: Though the 1848 Revolution was put down??, Austria did not stop declining??. Economic stagnation?? and racial rivalries?? were the orders of the day????. Metternich's??? escape?? marked the end of his repressive??? Metternich System within the empire. Without Russia's help, it would have been doubtful whether the Hungarian revolt could have been suppressed successfully in 1849. Though in 1850 Austria was able to prevent Prussia from making the Erfurt Union???? (the Prussian League), yet in the long run???? her position in Germany was to be replaced by Prussia. ...read more.

Unlike Cavour, Bismarck found it unnecessary to carry out economic reforms to strengthen Prussia. Before his rise to power in 1862, in fact, the Zollverein had flourished?? Prussia's economic capacity??. Bismarck needed merely spending the huge national wealth on his army reform and construction of more railways so that Prussia could win easily in any lightning war. 4. The exclusion?? of Austria from the Zollverein weakened considerably her leading position in Germany vis-�-vis?? Prussia. Before 1848 Metternich opposed Austria's participation in the Zollverein because economic progress and industrialization might encourage the rise of middle class in his empire. Such people would threaten the rule of the Austrian aristocracy. After 1848 Austria changed the policy but her application for membership in the Zollverein was usually blocked?? by Prussia. Consequently, Austria's economic hardship was never improved. She remained an agrarian?????? economy. In the long run, Germans tended to think of national unity without her. 5. The importance of the Zollverein to the success of German unification should not be exaggerated??. By the 1860s, actually, the industrial capacity of the Zollverein was just about 1/4 of the British. So Prussia's economic foundation?? was merely a supplementary???, not a major, factor for the creation of the German Empire. Conclusion David Thomson points out that in the 19th-century Europe there were struggles between the forces of change and the forces of continuity. Prussia championed?? the former, and the success of German unification in 1871 marked surely a turning point in European history. 1 1 ...read more.