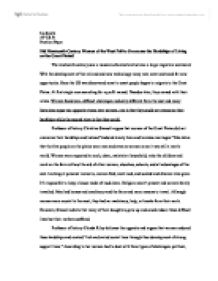 Iris Smith AP US B Position Paper Did Nineteenth-Century Women of the West Fail to Overcome the Hardships of Living on the Great Plains? The nineteenth century saw a massive urbanization but also a large migration westward. With the development of the railroad and new technology many men went westward for new opportunity. Once the US was discovered coast to coast people began to migrate to the Great Plains. At first single men searching for a profit moved. Decades later, they moved with their wives. Women faced new, difficult challenges radically different from the east and many historians argue two opposite views over women; one is that they could not overcome their hardships while the second view is that they could. Professor of history Christine Stansell argues that women of the Great Plains did not overcome their hardships and instead "endured lonely lives and loveless marriages." ...read more.

Professor of history Glenda Riley believes the opposite and argues that women endured these hardships and created "rich and varied social lives through thee development of strong support lines." According to her women had to deal with three types of challenges: political, natural, and personal. Water was scarce, fire was a great danger, winters were freezing, summers were burning, insects were killer, and houses offered poor protection. Politically, they had to deal with Bleeding Kansas, men went to war and left their families alone, economic unrest, movement of ex-slaves into the area, and the fight for women's rights created a "long series of political upheavals." Personally there was r****m, few friends, demanding husbands, divorce grew, and many just left. Women endured these pains and constantly reminded their husbands that they had better opportunity here. ...read more.

These were really difficult times and women were expected to complete the traditional role of a homemaker and work as a farmhand. It was tough and the closest neighbors were miles and miles away. I agree with Riley more though but mainly for one reason. All women got the vote on 1920 but Wyoming had given them the vote about 50 years earlier in 1869. Its obvious men saw that they were important and necessary so women received equal rights decades before the nineteenth amendment. It's true when Stansell states that it was a "men's sphere" but it was like that everywhere in the U.S. and since women got the vote in the west before they did in the east it makes sense that they were important to the community. They were important to the advancement if the west and they did endure these hardships. There was more divorce but more families moved to the plains and technology and opportunity made it easier for these women. ...read more.