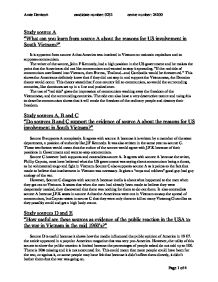 Study source A "What can you learn from source A about the reasons for US involvement in South Vietnam?" It is apparent from source A that America was involved in Vietnam to maintain capitalism and to suppress communism. The writer of the source, John F Kennedy, had a high position in the US government and he makes the point that the Americans did not like communism and wanted to stop it spreading. "If the red tide of communism overflowed into Vietnam, then Burma, Thailand...and Cambodia would be threatened." This shows the Americans definitely knew that if they did not step in and support the Vietnamese, the Domino theory would occur. This theory stated that if one country fell to communism, so would the surrounding countries, like dominoes set up in a line and pushed over. The use of "red tide" gives the impression of communism washing away the freedom of the Vietnamese, and the surrounding countries. The tide can also have a very destructive nature and using this to describe communism shows that it will erode the freedom of the ordinary people and destroy their freedom. Study sources A, B and C "Do sources B and C support the evidence of source A about the reasons for US involvement in South Vietnam?" ...read more.

This shows the people the Government were covering up what was going on. This would have annoyed the American public and made them angry at the Government for lying to them for so long. Through this article the American public would have discovered that they were fighting the war using dirty tactics. Source F is a letter written home to a family member or a girlfriend or friend, by a soldier fighting for his country in 1969, telling them about the horrors of war. Because it is written, presumably to someone he trusts, he does not lie and cover up the nasty details. He gives a truthful account. He tells the receiver that the war is a waste of young life and words such as "tragic" evoke feelings of sadness in the reader. The way he writes, "I'm sick of facing everyday a new bunch of kids getting ripped to pieces," shows the war is futile and they are never going to win. This letter would change the public opinion because the receiver would tell their friends about what they had been told and they would tell their friends and so on, and the news would spread quickly of the bad things happening to the countries men out in Vietnam. ...read more.

The viewers saw what their superiors and equals thought and began to fell that if that's how that person feels that they should feel the same as well. One of the most famous and impacting quotes made on television was when Walter Cronkite said on live broadcast "What the hell is going on? I thought we were winning this war." Mr Average American had lost faith in the war and live on television. The American public saw it and would have begun to loose faith too. Source D tells us about a public vote that showed how 64% of people who had watched the war on television had said "television made them feel like backing up the boys in Vietnam." This shows that watching the war changed people attitudes about the conflict for the better and made them want to back up the men fighting for the freedom of the Vietnamese peasants, instead of making them feel that they ought to back up the men fighting simply because it was their husbands and fathers and brothers fighting out there. Many commentators have said that television lost the Vietnam War for America - as the full horror of conflict was beamed into people's homes public support diminished. The media coverage on television was bold and aggressive and turned the ordinary Americans against the war. Amie Derricott candidate number: 0231 centre number: 24100 Page 1 of 3 ...read more.