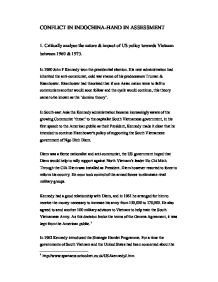 CONFLICT IN INDOCHINA-HAND IN ASSESSMENT 1. Critically analyse the nature & impact of US policy towards Vietnam between 1960 & 1973. In 1960 John F Kennedy won the presidential election. His new administration had inherited the anti-communist, cold war stance of his predecessors Truman & Eisenhower. Eisenhower had theorized that if one Asian nation were to fall to communism another would soon follow and the cycle would continue, this theory came to be known as the 'domino theory'. In South-east Asia the Kennedy administration became increasingly aware of the growing Communist 'threat' to the capitalist South Vietnamese government, in his first speech to the American public as their President, Kennedy made it clear that he intended to continue Eisenhower's policy of supporting the South Vietnamese government of Ngo Dinh Diem. Diem was a fierce nationalist and anti-communist, the US government hoped that Diem would help to rally support against North Vietnam's leader Ho Chi Minh. Through the CIA Diem was installed as President. Diem however resorted to force to reform his country. He soon took control of the armed forces to eliminate rival military groups. Kennedy had a good relationship with Diem, and in 1961 he arranged for him to receive the money necessary to increase his army from 150,000 to 170,000. He also agreed to send another 100 military advisors to Vietnam to help train the South Vietnamese Army. As this decision broke the terms of the Geneva Agreement, it was kept from the American public.1 In 1962 Kennedy introduced the Strategic Hamlet Programme. ...read more.

On the 4th August 1964 both the Maddox & companion ship reported 'hostile attacks'. One day later Johnson submitted a resolution to Congress asking for 'unlimited support to stop North Vietnamese aggression towards US ships. Congress approved what immediately became known as the Tonkin Gulf Resolution, in simple terms, it had two parts; 1. The US military could use 'any and all resources against North Vietnam. 2. The United States could provide 'direct combat support' to any member of the South East Asia Treaty Organization. As South Vietnam was a member of SEATO, and now was 'threatened' by North Vietnam the US could justify its position.6 i.e. Johnson was given complete control over military matters in the Vietnams. Three months after being voted president, Johnson commenced Operation Rolling Thunder. Unlike a single bombing raid, the raids were to take place on a regular basis. The plan was to destroy the North Vietnamese economy and to force her to stop assisting guerrilla fighters in the south. Bombing was also directed at territory controlled by the NLF in South Vietnam. The plan was to last initially for eight weeks but it lasted for the next three years. In that time, the US dropped 1 million tons of bombs on Vietnam.7 Chemicals were also sprayed on crops & deep jungle. Between 1962 and 1969, 688,000 acres of farmland were sprayed with a chemical called 'Agent Blue'. The aim of this exercise was to deny food to the NLF. ...read more.

During the presidential campaign Nixon promised to negotiate the end of the Vietnam War. However, negotiations with North Vietnam at the Paris peace talks were unproductive and Nixon decided to escalate the war by bombing NLF bases in Cambodia. Soon after taking office. Nixon introduced his policy of "vietnamization". The plan was to encourage the South Vietnamese to take more responsibility for fighting the war. It was hoped that this policy would eventually enable the United States to withdraw gradually all their soldiers from Vietnam.13 In June 1969, Nixon announced the first of the US troop withdrawals. The 540,000 US troops were to be reduced by 25,000. Another 60,000 were to leave the following December. By 1972 Nixon was convinced that a victory in Vietnam was unobtainable. In October, 1972, Henry Kissinger, advisor on National Security Affairs came close to agreeing to a formula to end the war. The plan was that US troops would withdraw from Vietnam in exchange for a cease-fire and the return of 566 American prisoners held in Hanoi. It was also agreed that the governments in North and South Vietnam would remain in power until new elections could be arranged to unite the whole country. However the US effectively left S. Vietnam to fight by itself after so many years of aid and support. The US left a significant mark on Vietnam, the 'rainbow herbicides' used to deforest the jungles had left many peasants poisoned, chemicals such as napalm left many scarred for life & there were many illegitimate children born with American fathers, not to mention that S. Vietnam was now fighting a war which it was not prepared for. ...read more.