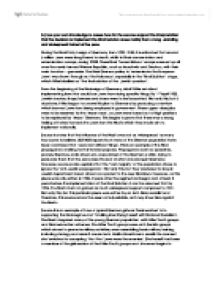 Use your own knowledge to assess how far the sources support the interpretation that the decision to implement the Final Solution arose mainly from a long-standing and widespread hatred of the Jews.

b.) Use your own knowledge to assess how far the sources support the interpretation that the decision to implement the Final Solution arose mainly from a long-standing and widespread hatred of the Jews. During the n**i Party's reign of Germany from 1933-1945, it is estimated that around 6 million Jews were slaughtered to death, whilst in n**i concentration and extermination camps, during WWII. These n**i 'forced labour' camps were set up all over the newly formed Weimar Republic, such as Auschwitz and Dachau, with their main function - genocide. The n**i German policy to 'exterminate the European Jews' was shown through out the Holocaust, especially in the 'Final Solution' stage, which Hitler labelled as "the final solution of the Jewish question". From the beginning of the n**i reign of Germany, Adolf Hitler set about implementing laws that could ban Jews from doing specific things. By 1st April 1933, Jewish doctors, shops, lawyers and stores were to be boycotted. Not only this, but 6 days later, Hitler began to unravel his plan to Germany by producing a new law which banned Jews from being employed in government. ...read more.

Source C is a brief insight into what it was like to be in a family in n**i Germany that had been separated by political views. Bernt Engelmann recalls how he spoke of the 'unspeakable crudeness and cowardice' of the n**i's, whereas his cousin, Klaus-G�nther objected by stating 'you have to accept the idea of political necessity'. This is in comparison with source A which suggested that there were conflicting, political views through out the German population. Not only this, but it also identifies with source B and the n**i propaganda. It can be established that the cousin, Klaus- G�nther, has been influenced by n**i propaganda, such as Hitler Youth and n**i literature. He details his feelings towards the Jews by labelling them 'parasites'. This again suggests that there was much widespread hatred of Jews, which of course could have helped make the decision to implement the Final Solution. The 'future SS General' Klaus, also argued that the violence at Kristallnacht was much better than a 'hundred years of struggle'. However, clearly the n**i propaganda had lead people to believe that the new Aryan race was superior to the Jews, and that they should make them pay and put the money towards 'our defences in the West'. ...read more.

Alan Farmer, also attempts to suggest that due to the fact the invasion of the USSR was not going to plan, Hitler was forced to 'initiate extermination out of desperation'. Therefore, he began to kill all Russian Jews, 'which lead him to decide to kill all Jews'. This idea conflicts with the majority of the other sources, which have relied on the mass amount of propaganda that was issued during the time, and that many of the authors of the sources were recalling sections of time from the period, whereas Source E is written by a 'modern historian'. Although, it is fair to suggest that Alan Farmer may have had more information at his disposal and has also had more time to analyse the period. In conclusion, it does seem as though the large majority of the sources available agreed that there was a widespread hatred of the Jews throughout Germany, caused by the n**i influence, and this did lead to Hitler implementing the Final Solution. I feel as though n**i propaganda and other schemes such as n**i-education, lead to a very convinced nation. I also believe Source B was a good example of how a child could be so easily 'brainwashed' into believing the 'Jews were the enemy', through Hitler Youth and n**i Education. Bill Stephens ...read more.