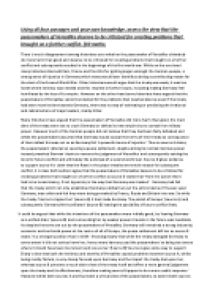 Using all four passages and your own knowledge, assess the view that the peacemakers of Versailles deserve to be criticized for creating problems that brought on a further conflict.

Source A goes some way to support Sharp?s view that both the leniency and severity of Versailles caused problems however source A, whilst being mostly factual, is very closely focused upon Germany and the impact the treaty had upon her, whereas source B presents a much wider view of the treaty itself and offers a more general judgement upon the treaty and its effectiveness, therefore making source B appear to be a more useful response. ? However whilst both sources A and B present a critical view of the peacemakers, to extent both sources show some disparity as source A seems to focus more upon the ?devastating? results of the treaty and the ?powerful sense of injustice? it dispelled upon Germany whereas source B shows a closer centre upon actually identifying the flaws and ?deficiencies in the settlement? hence providing greater evidence which actually backs up Sharp?s criticisms of the peacemakers? attempt ?in vain to draw their maps around people rather than move the people to fit the maps.? On the other hand however other historians would argue that it would be unfair to blame the peacemakers of Versailles for creating problems that brought on further conflicts, there was no way of possibly predicting the events that were to come and obviously had Britain, France and the USA known the power Germany was to become, the terms of the treaty would have been obviously different. ...read more.

Ferguson points out a main flaw stating that ?none of the peacemakers saw it as applying to their own empires ?only to the empires that they had defeated.? Making it evident that while the peacemakers cannot be criticized for the ignorance they showed to future conflicts that would have been impossible to have predicted as they ?had to deal with reality, not what might have been? (source C) their ignorance of the potential power of Germany and hence the total failure of the collective powers of France, USA and Britain after 1919 to contain German power contributed to the outbreak of the war and therefore makes the peacemakers accountable. To conclude, whilst it is clear as source C argues that the peacemakers ?grappled with huge difficult questions? and could not have possibly foreseen the events that were to come in subsequent years, there were undeniable flaws in the treaty and one could argue had they not chosen as source B states ?too severe where it should have been too lenient and vice versa? then Germany would not have been in such a dominant position with the capability and ?necessary resources? to eventually become such a forceful power and ultimately begin the second world war, hence it cannot be denied that the peacemakers deserved to be criticized to a certain extent for creating problems that brought on a further conflict. ...read more.