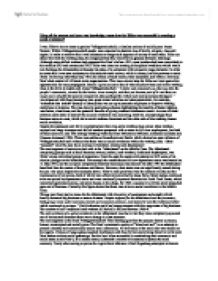 Using all the sources and your own knowledge, assess how far Hitler was successful in creating a social revolution?

Using all the sources and your own knowledge, assess how far Hitler was successful in creating a social revolution? It was Hitler's aim to create a genuine Volksgemeinschaft, a classless society of racially pure Aryan Nazism. Within Volksgemeinschaft people were expected to abandon ties of family, religion, class and region. In order to achieve this it was necessary to merge each segment of society to each other. Hitler set about first with the working class; he recognised that this would be his greatest domestic challenge. Although some skilled workers had supported the n**i's before 1933, most workers had been committed to the socialist SPD and communist KPD. Hitler was intent on creating a disciplined workforce which would not challenge his dictatorship or threaten his plans of re armament with excessive wage demands! In order to create this it was seen necessary to eliminate the trade unions, which in theory, had the prowess to resist Hitler. On the day after May Day 1933, the offices of trade unions were ransacked, and within a few days n**i's had control of 169 trade union organisations. This was a crucial step for Hitler as it now game him opportunities for mass propaganda. ...read more.

Farmers were often financially supported to stay on the land and many were made exempt from paying insurance. Thirdly farming was regulated by the Reich Food Estate which was a huge organisation. Its role was to supervise the country's 3million farms. This organisation fixed prices and wages, set production targets and dictated crop rotation. These measures suggest a great effort at a social revolution in the countryside however with the consequences of autarky and re armament these measures didn't really materialise. The role of women and family was another key area for the n**i's it was also a very dubious one. n**i ideology stressed that women should have a purely domestic role in society. Their duty was to produce healthy Aryan children, uphold conservative principals, and comfort their husbands in their service to the state. Source 1, Hitler's direct address to Women in general across Germany clearly states these requirements "If the mans world is said to be the state, his struggle, his readiness, to devote his powers to the service of the community, then it may perhaps be said that the woman's is a smaller world. ...read more.

First and foremost, Hitler needed the elites, big businesses, landowners, Junkers and the army. Without these elements supporting the party, Hitler would lose massive amounts of influence and control, and the sheer fact that they still existed, never mind in cahoots with Hitler, goes against the proposed classless society. Another point of Volksgemeinschaft was that Hitler would have complete control over the state, which he did not have. Due to Hitler's need to pursue foreign policy targets, this scheme is a failure. The war effort and efforts of autarky led to many changes to an already disturbed society. Also it would be impossible for Hitler to exterminate everybody that does not match his Volksgemeinschaft criteria as they were imperative to the war effort. In contrast to the nationalistic point of Aryan workers was the fact that foreign workers were readily used on farms as all the able men were conscripted to the army. Not only does this oppose the opinion of German workers, it also contradicts the traditional way of life which Hitler had promised in Volksgenossen pointed out in source 6 "glaring contradictions". Also due to the war effort, women were needed in the factories and this could not be avoided, once again opposing the traditional lifestyle and the proposed role of women in Volksgemeinschaft. ...read more.