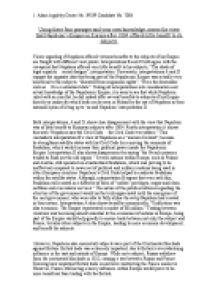 Using these four passages and your own knowledge, assess the view that Napoleons Empire in Europe after 1804 offered little benefit to its subjects.

﻿Adam Appleby Centre No. 39339 Candidate No. 7004 Using these four passages and your own knowledge, assess the view that Napoleon?s Empire in Europe after 1804 offered little benefit to its subjects. Views regarding if Napoleon offered virtuous benefits to the subjects of his Empire are fraught with different view points. Interpretations B and C both agree with the viewpoint that Napoleon offered very little benefit to his subjects, ?The ideals of legal equality? social designs?, interpretation. Conversely, interpretations A and D support the opposite idea that being part of the Napoleonic Empire was actually very beneficial to the subjects, ?liberated from seigniorial rights?; ?Even the downsides such as? for a centralized state?. Taking all interpretations into consideration and actual knowledge of the Napoleonic Empire, it is easy to see that while Napoleon ruled with an iron fist, he did indeed offer several benefits to subjects of his Empire directly or indirectly which both can be seen in Poland by the use of Napoleon in their national hymn of living up to ?us and Napoleon? interpretation D. Both interpretations, A and D, show clear disagreement with the view that Napoleon was of little benefit to European subjects after 1804. Firstly interpretation A shows this with ?Napoleon saw the Civil Code? the Civil Code everywhere.? This contradicts interpretation B?s view of Napoleon as a ?warrior overlord?, because he strengthens satellite states with his Civil Code by removing the remnants of feudalism, which would increase their political power inside the Napoleonic Empire. ...read more.

Interpretation A, while grouped as disagreeing, shows that Napoleon always put France above the subjects, ?The key to the Napoleonic?French industry.? While the Empire had a market of 80 million, all of the subjects had to come behind French industry. For example, the Kingdom of Italy?s industry for manufactured products and which is suffered economically for. Interpretation B supports the view that while Napoleon helped to end feudalism technically, he encouraged it in principle, ?Feudalism, though?even labour services.? The end of feudalism can be linked directly to the use of the Civil Code within the Empire. Interpretation A shows this, ?Napoleon saw the...Civil Code everywhere.? The Civil Code spelt the end of the feudalism, but it was not imposed in every subject?s nation. Meaning that, feudalism did indeed still exist within the Empire, but only when it was beneficial for Napoleon to not impose the Civil Code in that nation. Leading to the assumption that the Empire brought more benefits to countries that would bring benefit back to France. Nations that could give Napoleon the military and other resources he wanted had the Civil Code imposed upon them to make it easier to collect this. Interpretation D has the general view that the Empire benefits were for the greater good of the nations within it, ?In most European?in the long run.? The subjects under Napoleon may not have benefited under him, only after the dissolution of the Empire did the ex-subjects of the Empire benefit. Meaning that the benefits the Napoleonic Empire offered were mainly long term benefits. ...read more.

Interpretation A reveals that the annexed territories were allowed to maintain a degree of national identity, ?In annexed territories?second language.? This could mean several things, firstly that the annexed territories were allowed to keep a set identity for themselves which is indeed good for encouraging nationalism in a country. However, not changing the teaching practises of a subject nation could mean that Napoleon intended for the annexed subject nations to remain politically weak in the Empire. Learning polish as a language would be essential to the communications between the two countries, by not making French obligatory, Napoleon keeps the annexed states in a position of dependency on France for communication. Ultimately, the interpretations support the view that the subjects under Napoleon?s Empire did not merely gain little benefits and instead were offered great benefits that were utilised by the subject states. Interpretations C and D view the benefits generally as something that would not be truly appreciated till after the fall of the first French Empire. Interpretations A and B share the view that for the Empire to offer benefits, it had to have several drawbacks, such as certain states not having the Civil Code fully imposed and Napoleon putting his social and dynastic motives before the well being of the subject state. However, this does not change the fact that benefits were offered. Interpretations C and D proved to be the most useful for deciding if Napoleon did only offer little benefit to subjects after 1804, with C proving to be the more useful of the two. Interpretations A and B only concentrated on the benefits that were offered directly by being part of the Empire and not other indirect benefits. ...read more.

This is a very strong response with good interpretation of the complexities in the sources and a sense of balance. The subtle differences in argument are well understood and knowledge is used to evaluate evidence. There could have been a little more consideration of provenance. 5 out of 5 stars.