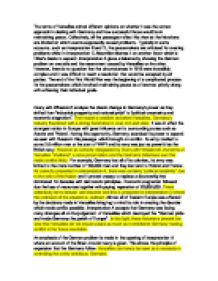 The terms of Versailles stirred different opinions on whether it was the correct approach in dealing with Germany and how successful these would be in maintaining peace. Collectively, all the passages reflect this view as the historians are divided on which events supposedly caused problems. Typically in some accounts, such as interpretation B and D, the peacemakers are criticised for creating problems whilst in interpretation C, Macmillan blames it on another factor which is Hitler's desire to expand. Interpretation A gives a balance by showing the German problem on one side and the resentment caused by Versailles on the other. However, there is no question that the circumstances in 1918 were incredibly complex and it was difficult to reach a resolution that would be accepted by all parties. The end of the First World War was the beginning of a complicated process for the peacemakers which involved maintaining peace as a foremost priority along with achieving their individual goals. Overy with Wheatcroft analyse the drastic change in Germany's power as they shifted from "industrial prosperity and national pride" to "political uncertainty and economic stagnation". Their report is credible as before Versailles, Germany's industry flourished with a strong foundation in coal, iron and steel. It was in effect the strongest nation in Europe with great influence on its surrounding states such as Austria and Poland. Having this opportunity, Germany exercised its power to expand as seen with Russia in this passage which brought on conflict. ...read more.

Even so, Macmillan wrongly dismisses the significance of Versailles in causing future conflict. Germany suffered huge losses and it was predictable that an attempt would be made to reverse the terms of Versailles. There was distrust between Germany and the peacemakers and unfortunately Versailles made Germany ever more anxious to restore its position and in doing so conflict was highly probable. Macmillan's judgement is further dismissed by the remilitarisation of Rhineland where the peacemakers took no action against Hitler boosting his confidence in German strength. Hence her reasoning that the peacemakers are not to be criticised is not credible as these events outline that the peacemakers were weak and ineffective which consequently encouraged Hitler to invade Czechoslovakia and Poland and ultimately led to the Second World War. The peacemaker's role wasn't a sole reason for conflict and Macmillan correctly indicates that the events leading to conflict were many and cannot be put down to Versailles. Her judgement is authentic as surely it could not have been only Versailles in 1919 that enabled the development of all the events that led to the Second World War in 1939. For instance, the Godesberg event in 1938, (Hitler requested for the right to occupy Sudetenland earlier than agreed) Hitler was more interested in his demands than keeping peace. Moreover, despite his infringement of the reparation and disarmament clauses, Britain tried to uphold peace by appeasement. The Young plan in 1929 helped ease the burden of reparation but as interpretation A concludes he still "wanted more" suggesting that the cause of conflict was further rooted than just Versailles. ...read more.

Unlike the other historians Sharp recognises that Versailles was mainly dominated with topics of "war guilt, reparations and disarmament" and in pursuing these aims, Sharp states that they failed to "foster a new democratic Germany". This argument is invalid as after the exclusion of the Kaiser, the new government formed was democratic and Sharp wrongly overlooks this development. Germany did fall back to being a dictatorship but this was due to the unfortunate event of the World Street Crash in 1929. This took the attention of Germany and allowed it time to re-emerge as a dictatorship. Sharp is therefore incorrect in blaming the peacemakers for not ensuring democracy in Germany. Interpretation B sums up the view that the peacemakers could have been more effective and because of the weak review of Versailles peace couldn't be upheld for long. The causes of conflict in my opinion developed over a period of time after the First World War. The treaty of Versailles does have a role in this as the problems that occurred such as Germany's attempts to regain what is lost is due to the terms of Versailles. This made Hitler aware of his stronghold and consequently made him more confident to pursue his aims of expansion. In doing so, Hitler became more of a reason why the Second World War came about as he cared more about his goals than upholding the peace. Poor international relations, the harsh judgement of Versailles and the German problem meant that keeping peace after the First World War was ever more difficult and eventually it climaxed into the Second World War. ...read more.