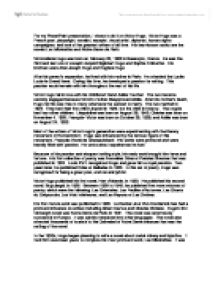 For my PowerPoint presentation, I chose to do it on Victor Hugo. Victor Hugo was a French poet, playwright, novelist, essayist, visual artist, diplomat, human rights campaigner, and one of the greatest writers of all time. His best-known works are the novels Les Mis�rables and Notre-Dame de Paris. Victor-Marie Hugo was born on February 26, 1802 in Besan�on, France. He was the third and last son of Joseph L�opold Sigisbert Hugo and Sophie Tr�buchet. His brothers were Abel Joseph Hugo and Eug�ne Hugo. After his parent's separation, he lived with his mother in Paris. He attended the Lyc�e Louis-le Grand there. During this time, he developed a passion for writing. This passion would remain with him throughout the rest of his life. Victor Hugo fell in love with his childhood friend Ad�le Foucher. The two became secretly engaged because Victor's mother disapproved Ad�le. After his mother's death, Hugo felt his was free to marry whomever he wanted to marry. The two married in 1822. They had their first child L�opold in 1823, but the child in infancy. The couple had four other children. L�opoldine was born on August 28, 1842; Charles was born on November 4, 1826; Fran�ois- Victor was born on October 28, 1828; and Ad�le was born on August 24, 1830. ...read more.

In his next novel, Les Travailleurs de la Mer, Victor turned away from social and political issues. The novel was well received because of Hugo's popularity and the success of the first book. In his next novel, L'Homme Qui Rit, he returned to writing about political and social issues. This book painted a picture of the aristocracy. However, this book was not as successful as the others were. His last novel, Quatrevingt-treize, was published in 1874. This novel was different then all others because the subject was Reign of Terror during the French Revolution. Many people are not aware of this, but Victor Hugo was also a talent artist. He produced more than 4,000 drawings during the course of his life. At first, this was a hobby for Hugo, but it eventually became another way to vent his feelings. He kept his artwork out of the public eye because he feared it would overshadow his literary work. However, he enjoyed sharing his drawings with his family and friends. He sometimes would give his artwork as gifts. Some of his work was shown to Van Gogh and Delacroix. The two said if he had become a painter instead of a writer, he would have outshone the artists of their century. ...read more.

Marchers stretched from Avenue d'Eylau, down the Champs-Elysees, and all the way to the center of Paris. The marchers marched for six hours to pass Hugo as he sat in the window at his house. On May 22, 1885, at the age of 83, Victor Hugo died. The cause of death was old age. He was not only remembered as a prominent figure in French literature, but also internationally as a diplomat who had helped preserve and shape the Third Republic and democracy in France. More than two million people joined his funeral procession in Paris from the Arc de Triomphe to the Panth�on, where he is buried. Today, Hugo's work continues to be popular. His works continue to be inspirations for playwrights and musicians. One of the biggest blockbuster musicals is Les Mis�rables, which is based on his book, remains popular. In 1996, Disney created an animated film based on his book, Notre-Dame de Paris. Hugo's novel against capital punishment, Le Dernier Jour d'un Condamn�, has recently been adapted into an opera by David Alagna (libretto by Fr�d�rico Alagna). Their brother, tenor Roberto Alagna, performed in the opera's premiere in Paris in the summer of 2007 and again in February 2008 in Valencia with Erwin Schrott as part of the Festival international Victor Hugo et �gaux 2008. ...read more.