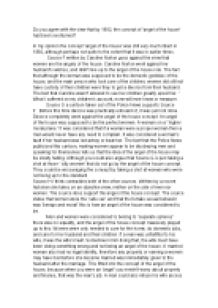 Victorian Women. Do you agree with the view that by 1882, the concept of angel of the house had been overturned?

﻿Do you agree with the view that by 1882, the concept of ?angel of the house? had been overturned? In my opinion the concept ?angel of the house? was still very much intact in 1882, although perhaps not quite to the extent that it was in earlier times. Source F written by Caroline Norton goes against the view that women are the angels of the house. Caroline Norton went against her husband?s wishes, and didn?t live up to the angel of the house role. The fact that although the woman was supposed to be the domestic goddess of the house, and the main person who took care of the children, women did still not have custody of their children were they to get a divorce from their husband. The fact that Caroline wasn?t allowed to see her children greatly upset her. ? What I suffered on my children?s account, none will ever know or measure. ...read more.

Women were only needed to care for the home, do domestic jobs, and care for her husband and their children. If a man was unfaithful to his wife, it was the wife?s fault. Somehow in him doing that, the wife must have been doing something wrong and not being an angel of the house. A married woman also had no legal identity, therefore any property or earning a women may have had before she became married was immediately given to the husband after the marriage. This fitted into the concept of the angel of the house, because when you were an ?angel? you needn?t worry about property and finance, that was the man?s job. A man could also refuse his wife access to their children. This happened in the Caroline Norton case in which we saw in Source F. There were a few happenings in the late 1800?s that may suggest that the angel of the house concept may be slowly fading from people?s minds. ...read more.

Although they were still very much inferior to men, and many men believed that this act was only put in place to placate women from fighting for the right to vote. Men were still under the impression that women could not deal with anything important or significant, such as politics. So in conclusion I do agree that by 1882 the ?angel of the house? concept had been challenged, and many more women and men, were thinking more about equality between the sexes. And that perhaps women may be able to do more than just menial domestic jobs. However there was still a long, long way to go before the ?angel of the house concept? had been fully overturned. Men were still unwilling to give any real ?important? rights to women and still thought them to be hugely inferior to themselves. It was still a women?s place to be in the house, looking after the children, looking after the husband, to be weak and unintelligent. This stereotype of women had not changed and wouldn?t for a long while yet. ...read more.