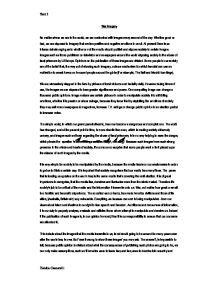 War Imagery No matter where we are in the world, we are confronted with images every second of the day. Whether good or bad, we are exposed to imagery that evokes positive and negative emotions in us all. At present there is an intense debate raging as to whether or not the media should publish and expose society to certain images. Images such as those published on television and newspapers around the world exposing society to the abuse of Iraqi prisoners by US troops. Opinions on the publication of these images are divided. Some people in our society are of the belief that, the very act of showing such imagery, acts as mechanism for which terrorist can use as motivation to wreak havoc on innocent people around the globe [For example, The Bali and Madrid bombings]. We are excessively slapped in the face by pictures of local violence and brutality daily. However during times of war, the images we are exposed to bare greater significance and power. ...read more.

It is important that society recognises that our media has many flaws. The press that is feeding us updates on the war in Iraq is the same media that's covering the next election. It is of great importance to recognise, that the media lies, deceives and fluctuates more then the stock market. Therefore it's society's job to be critical of the media and the information it transmits onto us. War, not matter how great or small is a horrible and traumatic experience. The so called war on terror, has made America civilians and those of its allies, [Australia, Britain etc] very vulnerable. Everything we treasure can and is being manipulated - from our views about Islam and Muslims to our right to free speech and freedom. As citizens and consumers of information, it is our duty to properly analyse, evaluate and criticise those whom attempt to manipulate and deceive us. Indeed if the publication of such images is, in our opinion immoral, then it is our responsibility to ensure that our concerns are attended to. ...read more.

The public knows that we are at war, with Iraq but media fails to informs us of the real reason why, and fails to provide us with the total casualties suffered by American troops, but litters our minds with the scores of Iraqi's that are being killed unnecessarily. These are the costs of war. Without information, we cannot know these costs, nor the justification for the war. Words are not enough to convey this information. Images such as these portray the true costs of war, but to what extent can we deem such ghastly images as acceptable. In any war, there will be casualties -- people hurt, killed or taken prisoner. In the current war in Iraq, numerous troops from both the allied coalition and the Iraqi military have been taken captive. When some American prisoners of war were shown on Iraqi television, U.S. officials accused Iraq of breaking the rules. Iraqis have accused Americans of targeting civilians, homes and hospitals. Each side accuses the other of war crimes. But in a conflict where one force is bigger, stronger, and more technologically advanced, some say the old rules don't apply. ?? ?? ?? ?? Text 3 Eleisha Casuscelli ...read more.