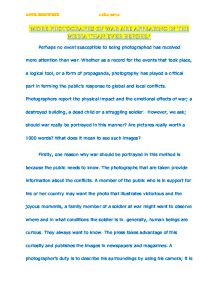 'MORE PHOTOGRAPHS OF WAR ARE APPEARING IN THE MEDIA THAN EVER BEFORE.' Perhaps no event susceptible to being photographed has received more attention than war. Whether as a record for the events that took place, a logical tool, or a form of propaganda, photography has played a critical part in forming the public's response to global and local conflicts. Photographers report the physical impact and the emotional effects of war; a destroyed building, a dead child or a struggling soldier. However, we ask; should war really be portrayed in this manner? Are pictures really worth a 1000 words? What does it mean to see such images? Firstly, one reason why war should be portrayed in this method is because the public needs to know. The photographs that are taken provide information about the conflicts. A member of the public who is in support for his or her country may want the photo that illustrates victorious and the joyous moments, a family member of a soldier at war might want to observe where and in what conditions the soldier is in. ...read more.

This is a valid point; however this image was one exception for the editor. He or she also knew that the public needed to know. War photography also raises questions about freedom of the press, with government control inevitably at issue. There is always the possibility that censorship by the government and self-censorship by photographers, editors, and publishers, combine to limit what we see about any particular military situation. In World War I, there was heavy censorship, access to the front line for photographers was not allowed, and there were only few photographs of actual combat. Many people may support the idea of censorship, as there are many images that are not liable for public observation. The BBC 6 o clock news cannot show the shocking images of conflict. They are well aware of the type of viewers who watch the program. On the other hand, photographers often intrude on private grief. Many subjects of the photographs do not desire the cameras flashing near their face during a moment of grief. ...read more.

One major example is South African photo journalist and war photographer Kevin Carter, who won the Pulitzer Prize in 1994 for a picture taken in Sudan. The picture shows a vulture behind a crouching and starving child. Carter took the picture but failed help the child. He committed suicide. In his farewell letter he says: "I'm haunted by the memories of the murder, of the corpses, of the rage, of the pain ..., of starving and wounded children, of trigger-happy madmen ...The pain of life surmounts the joy to an extent that no joy exists anymore..." The speech says how bad his situation was, his suicide proves to the public that he really was affected by the scenes. War photography has its good values and the bad values. The good values are that the public finds out more, the photographs help change opinion; whereas the bad values are that photography intrudes on private grief and causes affects the photographer. Overall war photography should still exist. Through the aid of these photographs, people generate their opinions on conflict, feuds and other general combat issues. ?? ?? ?? ?? ANIK BHOWMIK 11K4 3074 ...read more.