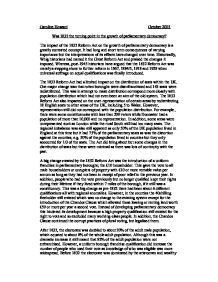 Was 1832 the turning point in the growth of parliamentary democracy?

Caroline Howard October 2005 Was 1832 the turning point in the growth of parliamentary democracy? The impact of the 1832 Reform Act on the growth of parliamentary democracy is a greatly contested concept. It had long and short term consequences of varying importance but the interpretations of its effects have changed over time. Historically, Whig historians had named it the Great Reform Act and praised the changes it imposed. Whereas, post-1945 historians have argued that the 1832 Reform Act was merely a stepping stone to further reform in 1867, 1884/5, 1918 and 1928 when universal suffrage on equal qualifications was finally introduced. The 1832 Reform Act had a limited impact on the distribution of seats within the UK. One major change was that rotten boroughs were disenfranchised and 143 seats were redistributed. This was in attempt to make distribution correspond more closely with population distribution which had not even been an aim of the old system. The 1832 Reform Act also impacted on the over-representation of certain areas by redistributing 18 English seats to other areas of the UK, including 5 to Wales. ...read more.

Instead of developing parliamentary democracy this hindered its development because a high property qualification still existed for the right to vote and so excluded many working-class people. In addition, the Chandos Clause continued the corrupt practices of plural voting, but legalised them. After 1832, the electorate was doubled to about 20% of the adult male population, which equated to about 8% of the whole adult population. Although this was a dramatic increase it still meant that 92% of the adult population were not enfranchised. However, a uniform borough franchise qualification did increase the number of people who used their vote as knowledge of who was eligible was more widespread. Before 1832 the electorate was dominated by the aristocrats and wealthy landowners although a few working and middle class people qualified through qualification anomalies. After 1832 the upper-class still dominated but a big change was that many middle-class people were now enfranchised. However, the right to vote was still only afforded to men and universal suffrage did not occur until 1928. ...read more.

The 1832 Reform Act had a large impact on political parties and their reactions to this impact did increase parliamentary democracy. The uniform franchise qualifications and the electoral register meant that parties now knew who was eligible to vote in each constituency. This caused them to become more efficient and professional as they now needed to appeal to a larger electorate and both parties increased their organisation following the Reform Act. In itself the Great Reform Act, as it became known, did not increase parliamentary democracy in a significant way as its extension of the franchise and redistribution of seats was quite superficial. When it was introduced it was designed to satisfy the people's want for reform as opposed to bring about dramatic change. However, it was only the first step towards parliamentary democracy as it is today and did not signify the end of the process as the Whigs had envisaged. Although it was a stepping stone to0 further reform and, resultantly, most of the systems and practices that were in use by 1885 are still used today. ...read more.