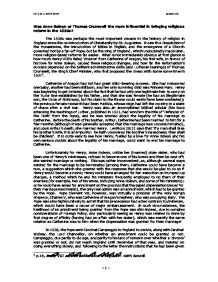 Was Anne Boleyn or Thomas Cromwell the more influential in bringing religious reform in the 1530s?

Was Anne Boleyn or Thomas Cromwell the more influential in bringing religious reform in the 1530s? The 1530s was perhaps the most important decade in the history of religion in England since the re-introduction of Christianity by St. Augustine. It saw the Dissolution of the Monasteries, the introduction of bibles in English, and the emergence of a Church governed not by a far-off Pope, but by the King of England, which undoubtedly made later, more religion-based reforms far easier. What is not immediately obvious at first glance is how much Henry VIII's failed 'divorce' from Catherine of Aragon, his first wife, in favour of his love for Anne Boleyn, caused these religious changes, and how far the Reformation's success depended on the brilliant administrative skills (and Lutheran leanings) of Thomas Cromwell, the King's Chief Minister, who first proposed the Break with Rome some time in 15311. Catherine of Aragon had not had great child-bearing success. She had miscarried one baby, another had been stillborn, and her only surviving child was Princess Mary. Henry was beginning to get irritated about the fact that he had only one legitimate heir to carry on the Tudor line established by his father, and that she was female (he had an illegitimate son, the Duke of Richmond, but his claim to the throne could easily have been contested); the previous female monarch had been Matilda, whose reign had left the country in a state of chaos after a civil war. Henry was also an accomplished biblical scholar (his book attacking the teachings of Luther, published in 1521, had won him the title of 'Defender of the Faith' from the Pope), and he was worried about the legality of his marriage to Catherine. Before the death of his brother, Arthur, Catherine had been married to him for a few months (although it was generally accepted that the marriage was unconsummated), and upon Arthur's death, she married Henry. ...read more.

The marriage had to be solemnized, in order for the offspring (or more importantly, any male offspring) to be legitimate and thus have a claim to the throne. The Act in Restraint of Appeals was thus passed in March 1533 - this made it illegal to appeal to any authority outside the realm in any legal matter, which enabled the 'divorce' hearing of late May 1533 to take place independently and without the consent of the Pope. Catherine of Aragon refused to attend the hearing (in contrast to her passionate plea for mercy to Henry at Campeggio's and Wolsey's previous hearing in England), and it was completed in just three days. Henry and Anne had already been secretly married by Cranmer, and soon afterwards, Anne was crowned Queen. The Break with Rome had been more or less completed, thanks mainly to Cranmer, Cromwell and Anne, whose pregnancy (and Henry's desire to insure the legitimacy of any male offspring) made sure that proceedings took the shape that they did. Anne Boleyn's influence, however, did not stop at the 'divorce'. She was a reformer, and being so close to the King, it is easy to see how she could pressure him. She was fluent in French (having spent several years as a maid of honour to Margaret of Austria, who was ruling as a regent for her thirteen year old nephew) and she possessed a bible in French (which, unlike an English translation, was perfectly legal). This enabled her to see the benefits of being able to read the bible in the vernacular, particularly to those without their own chaplains. Both she and Cromwell were instrumental in the legalization of English bibles (by persuading Henry of the necessity of a vernacular translation to aid the religious comprehension of the masses) - Cromwell decreed that each Church must have 'one book of the whole Bible of the largest volume in English' by Easter 1539. ...read more.

The fact that it was he who influenced Henry to break with Rome is illustrated by the fact that Henry did not relinquish his authority to the Pope after the execution of Anne Boleyn and the death of Catherine of Aragon shortly afterwards; it is hard to believe that Henry and Cromwell did not discuss this, as Henry was still really a Catholic. The swings to and from Catholicism and Protestantism after Cromwell's execution also show that Cromwell was a driving force behind the Reformation, and without him the conservatives (for instance, the Duke of Norfolk) might have influenced Henry, who was uncertain about breaking with Rome, to keep England as a Roman Catholic country. In conclusion, it is very hard to decide whether Anne Boleyn or Thomas Cromwell was more important in the Reformation of the 1530s. Had it not been for Anne Boleyn, the annulment case would not have arisen as it did, and England would not have broken away from papal authority when it did (although, given Henry's lack of a legitimate male heir, he might well have married another woman and divorced Catherine of Aragon in similar circumstances, giving rise to the same problem). A reformation could, however, have occurred for religious reasons, but it would probably have happened quite a bit later. However, if it had not been for Thomas Cromwell, it is doubtful whether Henry would have continued with the Break with Rome (although Henry might have married Anne Boleyn in secret, and then, when Catherine died, he could have obtained a papal dispensation legitimizing any children they had). Certainly, the monasteries would not have been successfully dissolved had it not been for Cromwell, and his political and administrative expertise were responsible for the Act in Restraint of Appeals and the Act in Restraint of Annates, the two crucial pieces of legislation related to the Break with Rome. Perhaps Cromwell's principal role in the Reformation was in levelling the playing field for the more drastic Protestant reformations of Edward VI's reign, by dissolving the Monasteries, the main bodies that would have objected to a Protestant country. ...read more.