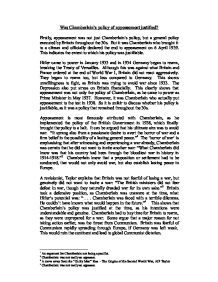 Was Chamberlain's policy of appeasement justified? Firstly, appeasement was not just Chamberlain's policy, but a general policy executed by Britain throughout the 30s. But it was Chamberlain who brought it to a climax and officially declared the end to appeasement on 6 April 1939. This indicates the extent to which his policy was justifiable. Hitler came to power in January 1933 and in 1934 Germany began to rearm, breaking the Treaty of Versailles. Although this was against what Britain and France ordered at the end of World War 1, Britain did not react aggressively. They began to rearm too, but less compared to Germany. This shows unwillingness to fight, as Britain was trying to avoid war since 1933. The Depression also put stress on Britain financially. This clearly shows that appeasement was not only the policy of Chamberlain, as he came to power as Prime Minister in May 1937. ...read more.

A revisionist, Taylor explains that Britain was not fearful of losing a war, but genuinely did not want to incite a war: "The British ministers did not fear defeat in war, though they naturally dreaded war for its own sake."3 Britain took a defensive position, as Chamberlain was unaware at the time, what Hitler's potential was: " . . . Chamberlain was faced with a terrible dilemma. He couldn't have known what would happen in the future."4 This shows that Chamberlain's policy was justified at the time, as his intentions were understandable and genuine. Chamberlain had to buy time for Britain to rearm, as they were unprepared for a war. Some argue that a major reason for not taking action earlier, was the threat from Communism. Britain was fearful of Communism rapidly spreading through Europe, if Germany was left weak. ...read more.

He realised that war was unwelcome, but I still believe that Britain should have acted earlier. When taking over in May 1937, Chamberlain should have taken a firm stand, with an aggressive foreign policy against the n**i threat, instead of leaving it until September 1938 to address the settlements. However, Britain had not rearmed enough to face Hitler in war, and there was always the fear of Communism spreading if Germany was left open to attack. Therefore, in that situation Chamberlain's policy of appeasement was justified as he had no other option but to try and avoid war, especially as Britain was militarily weaker than Germany at the time. 1 An argument for Chamberlain not being a pacifist. 2 Chamberlain was not really an appeaser. 3 A move away from the "Guilty Men" Idea - The Origins of the Second World War, AJP Taylor 4 Chamberlain was not really an appeaser. 5 Should Britain no have made a stand in 1936? - Winston Churchill, 22 February 1938. ...read more.