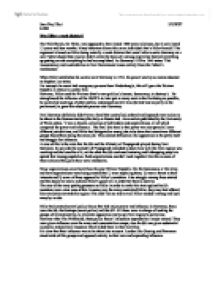 Was Hitler a weak dictator?

Was Hitler a weak dictator? The Third Reich, for Hitler, was supposed to have lasted 1000 years minimum, but it only lasted 12 years and four months. Many historians blame this on an individual that's Hitler himself. The argument is based on Hitler being actually a weak dictator that wasn't able to unite Germany as a new Fuhrer should had, also he didn't create the basis of a strong empire but hurried everything up putting on risk everything he had accomplished. As Germany 1918 to 1945 states 'The inconsistency and contradiction in n**i Government arose entirely from the Fuhrer's weaknesses'. When Hitler establishes his control over Germany in 1933, his power was by no means absolute as Stephen Lee states. For example he never had emergency powers from Hindenburg's, this still gave the Weimar Republic a chance to control him. However, Hitler used the Weimar State's own political element, democracy, to destroy it. He strengthened the influence of the NSDPA to later put as many seats in the Reichstag as possible, he controlled meetings of other parties, and passed several laws (he had vast majority in the parliament) to grant him absolute powers over Germany. n**i Germany definitely didn't have a head that controlled, ordered and imposed every action to be taken in the German territorylike Italy or Russia had. As an article published by the University of Wales states, 'it was a chaotic collection of individuals and organizations, all of which competed for power and influence'. The final idea here is that power was too spread all over different jurisdictions, and Hitler had delegated so many jobs to be done that sometimes different groups found them doing the same job. This created difficulties like opposition in the party itself and struggle for influence. A case of this is the roles that the SS and the Ministry of Propaganda played during n**i Germany. ...read more.

What was actually a success for the Nazis was the self dissolved Centre Party, this excluded the church from any sort of political activity. Hitler's intentions towards the Churches pointed that he intended to a major extend to ban them, and leave Nazism as a major ideology. Some of his most important members were completely anti-religious and even attempted to the beliefs of both Protestants and Catholics. However, there was no report stating that this was bound to happen, or that the number of laity was reduced, in fact it rose during war time. So Hitler achieved to control political influence of the Church, but never reached the point were Nazism was stronger than religious beliefs, not even his role as dictator allowed him to do so. Finally, the opposition was never the reason why Hitler was removed from his place as leader of Germany, his failures during war time, partly his wrong foreign policy and, as usually happens to every dictatorship, the militaries condemned him. The relations with the army were a key point to his success on establishing a strong dictatorship. The army was pleased indeed by the militarist policies he intended to establish before being elected as prime chancellor, and as well by the economic support the government gave to the army during his dictatorship. The army, was the only strong group that could ruin Hitler's attempts to consolidate his power. So he tried to please them as far as possible, showing this way that he needed the army, to be leader of Germany. This was by 1934. In July 1934 Hitler along with the army obliterated the whole structure and leaders in of what historian Lee calls 'their own criminals', the SA, this was called The Night of the Long Knives The army wasn't pleased by the acts of the SA and saw them as a possible threat to their interests, and Hitler hated the image that the SA gave. ...read more.

obstacle, no matter his methods he had the courage to stand in front of the world powers and put his foreign policy to practice. I agree completely with Alan Bullock that states in "Hitler: A Study in Tyranny" that such a program would be due to, 'Hitler had only one program, power without limit, and the rest was window dressing'. As a final conclusion, the question of Was Hitler a weak dictator is too vague? We need a comparison with another dictator like Mussolini or Stalin in order to say if it was actually strong or not. However, as stated through the whole argument presented Hitler did things differently to other dictators, had a different view of how to rule Germany, how to expand it and how to establish a dictatorship. This makes analyzing his methods and ranking them with how successful he was the only way to find a final answer to the question. We can say that Hitler had a dictatorship based on an ideology. He made the people work for the Fuhrer and for the success of n**i Germany as a new empire, this was a major achievement made by him. He didn't need to impose his power 100% by the use of force, rather he only needed to establish an ideology based nation. However, this also lead to disorganization and chaos among the political sphere of Germany, leaders confronting each other in order to please the Fuhrer, organizations with the same jurisdiction, etc. In this respect Hitler couldn't achieve what dictators like Stalin or Mussolini did, a country with one only and supreme leader. n**i Germany wasn't a complete dictatorship if compared to others. What we aren't able to deny is that where Germany was going was clearly devised by Hitler, and that the final authority in n**i Germany was him. He didn't have a strong dictatorship compared to Stalin of Mussolini, but a different one that was quite strong and achieved his main objectives. Jean Paul Hart 5/2/2007 L6B3 ...read more.