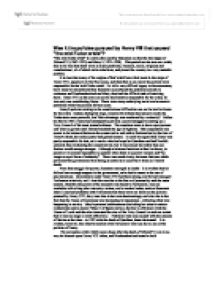 Was it the policies pursued by Henry VIII that caused &quot;the mid-Tudor crisis&quot;?

Was it the policies pursued by Henry VIII that caused "the mid-Tudor crisis"? "The mid-Tudor crisis" is a term often used by historians to describe the reigns of Edward VI (1547-1553) and Mary I (1553-1558). This period can be seen as a crisis, due to the fact that there were so many problems, financial, social, religious and constitutional, all of which led to rebellions, and placed the country in a very unstable position. It is clear that many of the origins of this 'crisis' have their roots in the reign of Henry VIII, especially in his final years, and therefore to an extent his policies were responsible for the 'mid-Tudor crisis'. He left a very difficult legacy to his successors, but it must be remembered that Somerset exacerbated the problems already in existence and Northumberland and Mary then had the difficult task of resolving them. Henry VIII on his own can not be held entirely responsible for the crisis, he was only one contributing factor. There were many underlying social and economic problems which his policies did not cause. Henry's policies relating to the constitutional difficulties can not be held to blame for the crisis. Indeed, during his reign, Cromwell's reforms had actually made the Tudor state more powerful, but "this advantage was weakened by a minority". Before he died in 1547, Henry had attempted to prevent a power struggle by setting up a Privy Council of his most trusted advisors. The members were to have equal powers and were to govern until Edward reached the age of eighteen. ...read more.

It is evident that Henry was at the root of the financial problems and that they were exacerbated by Somerset, but the positive achievements of Northumberland and Mary must not be forgotten. The financial problems also helped to spark off a social crisis. There was high inflation, a high population, more unemployment and an increase in the number of vagrants at this time. Only part of this can be attributed to the policies pursued by Henry VIII. It can be argued that his dissolution of the monasteries increased the number of vagrants, as the loss of monasteries meant there were seven thousand ex-religious who needed to find another way of life. It also meant a loss of charity as this was one of the functions of a Benedictine monastery. Henry can also be blamed for the enclosure policies which adversely affected the common people. Although in 1515 Wolsey had an enclosure act passed, it was not enforced, as the support of the gentry was necessary in parliament. However, there are many other reasons for the social crisis and the part Henry played in this was only a minor one. The main reasons are the underlying problems and the way in which Somerset in particular failed to deal with them. Harvest failures were frequent and this increased the chance of famine and the price of grain. Somerset failed to deal with the root causes of the problem (possibly due to the fact that he had no real understanding of them) and although the older generation of historians such as Elton see Somerset as being "humanitarian" and sympathetic to the poor, this is ...read more.

This did eventually happen, and Mary became very unpopular. Therefore, when dealing with the religious crisis, it can be argued that Henry was only responsible in part, and it is possible that even if he had not begun the religious changes himself, with the events taking place on the continent, and the influence of Luther, Zwingli, and Calvin, there were likely to be those in England who wanted reform. To conclude, it can be argued that Henry's policies were, in part, responsible for 'the mid-Tudor crisis'. It is clear that many of the problems, in particular the financial and religious problems, have their roots in his reign. However, the rulers in the period 1547-58 are also to blame, notably Somerset who was, despite the positive interpretation of his rule given by Elton, a poor leader. Mary I's stubbornness and single minded beliefs over religion also led to a crisis. The underlying social problems and the constitutional difficulties which no-one was responsible for, also played their part. Because Edward and Mary both ruled for such a short time, the country had to adjust very rapidly to the changes brought about. If either monarch had ruled for longer, and succeeded in establishing either Protestantism or Catholicism, it seems likely that stability would have returned to the country. It is also important to consider the relative strength of government in that even though there were major rebellions, it did not collapse at this time, and indeed, it is now believed by historians such as Heard that there was no real crisis. As he sees it, " a period of dynastic weakness and minority rule had passed without the country dissolving into civil war", as happened in France for example. ...read more.

The main strength of this essay is its detailed knowledge of the period. The points are well supported with accurate and relevant factual detail from across the period.

The main way to improve this work is to really tackle the question at the start and set up a stronger argument. One way to do this is to tackle the issue of whether the period should be seen as a crisis or whether it just had a normal amount of problems for the time.

There also could be a lot more writing directed at explaining where the causes of the problems came from. There could also be more judgement given to the different areas of 'crisis'. Some issues could be seen as being far more dangerous than others.

However overall this essay does a very thorough job of examining the period and largely stays focused on the question.