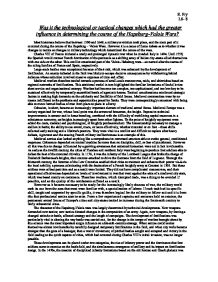 Was it the technological or tactical changes which had the greater influence in determining the course of the Hapsburg-Valois Wars?

Was it the technological or tactical changes which had the greater influence in determining the course of the Hapsburg-Valois Wars? Most historians believe that between 1300 and 1648, a military revolution took place, and the main part of it occurred during the course of the Hapsburg - Valois Wars. However it is a cause of fierce debate as to whether it was changes in tactics or changes in military technology which determined the course of the wars. Charles VIII of France initiated a costly and prolonged dynastic war when he invaded Italy in 1494. Until 1559, the Spanish would contest French domination of the peninsula as a shifting array of Italian city-states allied themselves with one side or the other. This conflict constituted part of the Valois-Habsburg wars-so named after the names of the ruling families of France and Spain, respectively. Large-scale battles were exceptional because of their risk, which was enhanced by the development of fortification. An enemy defeated in the field was likely to escape decisive consequences by withdrawing behind defences whose reduction involved massive expenses of time and effort. Medieval warfare therefore tended towards a process of small-scale manoeuvres, raids, and skirmishes based on regional networks of fortifications. This attritional model in turn highlighted the familiar limitations of feudal levies: short service and organizational entropy. Warfare had become too complex, too sophisticated, and too low-key to be sustained effectively by temporarily assembled bands of agonistic heroes. Tactical considerations reinforced strategic factors in making high demands on the solidarity and flexibility of field forces. Medieval commanders were by no means indifferent to the problems and opportunities posed by flanks. They were correspondingly concerned with being able to move formed bodies of men from place to place in a hurry. Cohesion, in short, became an increasingly important element of medieval armed forces. Medieval Europe was a society organized for war, whose focal point was the armoured horseman, the knight. ...read more.

Using secretly assembled bridging equipment; the Spanish crossed the river and routed the French. Louis was forced to give up Naples in the treaty of Blois of 1505. In 1512, Gaston marched his troops across northern Italy and marched south to lay siege to Ravenna. A combined force of Spanish and papal troops moved to raise the siege and in April, the two armies met outside the city. The battle was bloody but the French emerged victorious, but at the cost of the death of their brilliant commander, killed at the moment of victory. The French here took batteries of light field artillery called culverins into battle and were able to bombard the Spanish lines for over 2 hours. French domination of northern Italy though did not suit the Swiss and unusually they acted for themselves rather than as mercenaries - they aimed to protect their southern borders and secure their supplies of wine and grain and very successfully defended their position by defeating the French at Novara, restoring the Sforzas as Duke of Milan. An attempt by Louis to stage a comeback in 1513 ended disastrously. The Swiss, after routing his army at Novara, swept into Burgundy and besieged Dijon. They withdrew only after the local commander had signed a humiliating treaty which Louis subsequently refused to ratify. The French armies recklessly attacked a strong Habsburg position at Bicocca, near Milan. The French forces were defeated in battle and other French garrisons in the north of Italy soon surrendered. Charles now held Milan securely and had gained control of northern Italy. Bicocca and later Pavia demonstrated once and for all that tactics would have to be revised in face of the arquebus. The first demonstrated its power in a fortified defensive position, the second in the open field. The main victim at Bicocca was the Swiss infantry, at Pavia the French cavalry, each the best representative of its type. ...read more.

Cavalry was no longer used against arquebusiers. It was used against other infantry, or to attack pike supported by shot if they were already frontally engaged with other troops. There was a changed attitude to the prestige of the foot soldier. Much of the social stigma attached to infantry service had disappeared by the middle of the period. The increasing popularity of the foot-tourney among noblemen accustomed them to the sight of a gentleman in armour on his own legs. In effect there was increased emphasis on the combination of pike and musket. Firearms helped to make foot service more popular. Both arms were needed. Pike alone was vulnerable to shot; arquebusiers alone were vulnerable to any body of cavalry that charged in without presenting too leisurely, or too broad, a target. If there were pikes to break the impact and give the arquebusiers time to re-load, or arquebusiers to thin a charge before it hit the pikes, then the odds were heavily against the cavalry. In conclusion therefore it is impossible to argue that tactics or weaponry were more influential in determining the course of the Hapsburg-Valois wars, as both are so inextricably linked that they cannot be separated. However it is clear that the combination of new tactics and weaponry made warfare more lethal and high casualty rates began to be experienced more than ever before. There was no real decisive outcome to the wars so it is difficult to judge the influence of tactics and technology. Ultimately the newly complicated wars bankrupted both rulers, and in the end the fighting stopped, so financially exhausted were the two combatants. The balance of war swung from side to side but after the initial invasion by France it generally favoured the Hapsburgs who were the quickest to take up the new technology and tactics and indeed to refine them, and so ultimately it must be considered that it was in fact the use of the new tactics and technology that was the most influential in determining the course of the war than either tactics or technology. E. Fry L6- 8 ...read more.