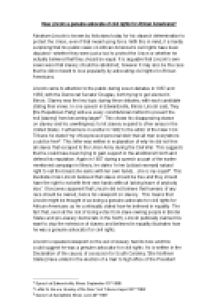 Was Lincoln a genuine advocate for civil rights for African Americans?

﻿Was Lincoln a genuine advocate of civil rights for African Americans? Abraham Lincoln is known by historians today for his staunch determination to protect the Union, even if that meant using force. With this in mind, it is hardly surprising that his public views on African American?s civil rights have been disputed - whether they were just a tool to protect the Union or whether he actually believed that they should be equal. It is arguable that Lincoln?s own views were that slavery should be abolished; however it may also be the case that he did not want to lose popularity by advocating civil rights for African Americans. Lincoln came to attention to the public during seven debates in 1857 and 1858, with the Democrat Senator Douglas, both trying to get elected in Illinois. Slavery was the key topic during these debates, with each candidate stating their views. In one speech in Edwardsville, Illinois Lincoln said, ?they [the Republican Party] will use every constitutional method to prevent the evil [slavery] from becoming larger[1]?. This shows his disapproving stance on slavery and his unwillingness to let slavery expand to other areas in the United States. ...read more.

Lincoln was simply a realist, he believed in equality but could do the most work for African Americans by getting elected and making small changes. The Emancipation Proclamation is often used as evidence of Lincoln?s advocacy of civil rights for African Americans. Effective from the 1st of January 1863, this order meant that slaves in rebel states became freedmen. This is clear proof that Lincoln supported the freeing of slaves. In a letter from Hannah Johnson, the mother of an African American soldier, she writes that ?When you are dead and in Heaven, in all a thousand years that action of yours will make the Angels sing your praises?[6]. This is obviously only one person?s view of the Proclamation but it is likely that many other African Americans felt the same. Johnson?s letter illustrates how important Lincoln?s Act was to the lives of African Americans, and also how significant an act like this was as it was so unprecedented. Lincoln believed that to gain eventual civil rights for African Americans, they must first be freed hence the Emancipation Proclamation. However, the introduction of African American soldiers, although seen by many as a step towards civil rights, did not result in all that was promised. ...read more.