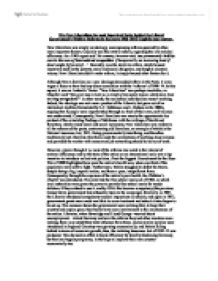 Was New Liberalism the most important factor behind the Liberal Government's Welfare Reforms in the years 1906-1914? Explain your answer.

Was New Liberalism the most important factor behind the Liberal Government's Welfare Reforms in the years 1906-1914? Explain your answer. New Liberalism was simply an ideology, encompassing reforms spurred by other, more important factors. Crucially was the need to reform, regarding the low national efficiency. As a 1905 report said 'No country, however rich, can permanently hold its own in the race of international competition if hampered by an increasing load of dead weight [of poverty]...'. Secondly, was the desire to reform, which housed incentives such as the poverty, moral and social obligation, and tangible electoral victory. New Liberalism didn't evoke reform; it simply housed other factors for it. Although New Liberalism as a new ideology demanded reform in the Party, it is too vague a factor to have had any direct correlation with the 'reforms' of 1906-14. In this aspect, it was an 'umbrella' factor. "New Liberalism" was perhaps inevitable, as Churchill said "this poor man is here as a result of economic causes which have been too long unregulated"- in other words, the realisation individualism wasn't working. Indeed, the ideology was not even a product of the Liberals, but grew out of an intellectual tradition formulated by L.T. ...read more.

Subsequently, Booth organised and led a campaign in favour of a system pensions paid for out of taxation, which won Labour and Trade Union support, and which would have healed the problem of poverty for the elderly.. By no coincidence was the Old Age Pensions Act passed 3 years later, which - heeding the advice of Booth - was a non-contributory scheme, financed by the government out of taxation, and providing 5 shillings a week to those over the age of 70. Furthermore, to appease poverty from unemployment, the government set up a 'labour exchange' and insurance principal; creating a network of exchange information about local work, and also planned a workers insurance scheme which workers would pay into and, in times of the aforementioned poverty, draw on what they needed. The moral and social justice included in Booth and Rowntree's work was a huge contributing factor in the Old Age Pensions Act of 1908, largely regarded as a significant step forward in terms of governmental intervention. Lloyd George also linked the two, by 1911 noticing "The administration of the Old Age Pension Act has revealed a mass of poverty...". ...read more.

The Liberals realised if they didn't deliver, Labour would continue to grow. Again, The Mines Act of 1908, which introduced a maximum eight-hour working day for miners, ( "a political compromise"-Pearce Stewart) was another reform which Labour were sympathetic too. Furthermore, with extended suffrage to the working class, Liberals had to get the working man's vote, and so their socialist reforms came at a time when Labour's 'guns' would have been most appealing to the electorate. Overall, it is clear that the Welfare Reforms were influenced entirely on the climate of the time, and New Liberalism simply put a name to this. Yes, moral and social justice unearthed by Booth and Rowntree were important, and the party still had to settle on their political identity, but poverty and its injustice had been around for decades and reform could have waited if need be; furthermore, Labour, although showing potential, were not a real threat until some years later. The welfare reforms were introduced because Britain as a country was failing, and 'New Liberalist Reforms' were, (arguably), just a semi-socialist guise focused on increasing national efficiency. That's not to say the reforms wouldn't have ever been introduced had Britain not struggled with the Boers; they would have been delayed, and were created in 1906-14 as a reaction to the (international) state of the nation. ...read more.