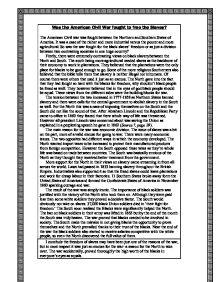 Was the American Civil War fought to free the Slaves

Was the American Civil War fought to free the Slaves? The American Civil war was fought between the Northern and Southern States of America. It was a case of the richer and more industrial versus the poorer and more agricultural. So was the war fought for the black slaves' freedom or as just a division between two contrasting societies in one huge country? Firstly, there were extremely contrasting views on black slavery between the North and South. The south being more agricultural needed slaves as the backbone of their economy to work in plantations. They believed that the plantations were the only place for blacks to be good enough to go. Some of the more religious Southerners also believed that the bible tells them that slavery is neither illegal nor inhumane. ...read more.

However all president Lincoln was concerned about was saving the Union as explained in a perplexing speech he gave in 1862 (Source 7, page 29). The main reason for the war was economic division. The issue of slaves was a bit on the part, more of a valid excuse for going to war. There were many economic issues. The two opposites had different ways in which the economy developed. The North wanted import taxes to be increased to protect their manufactured products from foreign competition. However the South opposed these taxes as they're whole life was based on trade between countries. The South was basically envious of the North as they thought they received better treatment from the government. ...read more.

The ban on black soldiers in their army was lifted in 1865 but by the end of the month the South was truly beaten. The war proved that blacks needed to be involved in society. The South made the mistake in not giving blacks the opportunity to prove themselves and the North prevailed thanks to their trust of the blacks. Near the end of the war the black soldiers also started to receive salaries competitive with the white people, so even the North discovered the full value of them. I conclude the freedom of slaves may have been just one of the reasons of the war, but in most respect it was just an excuse for the war- a reason for the North to take over. The war accidentally, proved thoroughly the high worth of the blacks in everyone's eyes as equals. ?? ?? ?? ?? ...read more.