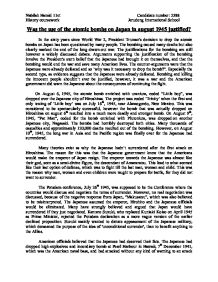 was the dropping of the atomic bombs justified?

Was the use of the atomic bombs on Japan in august 1945 justified? In the sixty years since World War 2, President Truman's decision to drop the atomic bombs on Japan has been questioned by many people. The bombing caused many deaths but also clearly marked the end of the long drawn-out war. The justifications for the bombing are still however a widely discussed debate. Arguments supporting the justification of the bombing involve the President's stern belief that the Japanese had brought it on themselves, and that the bombing would end the war and save many American lives. The counter-arguments were that the Japanese were already defeated and so 'why was it necessary to drop the bomb?". Especially the second type, as evidence suggests that the Japanese were already defeated. Bombing and killing the innocent people shouldn't ever be justified, however, it was a war and the American government did warn the Japanese about the consequences of continuing the fight. On August 6, 1945, the atomic bomb enriched with uranium, coded "Little boy", was dropped over the Japanese city of Hiroshima. The project was coded 'Trinity' when the first and only testing of 'Little boy' was on July 16th, 1945, near Alamogordo, New Mexico. This was considered to be spectacularly successful, however the bomb that was actually dropped on Hiroshima on august 6th resulted into a much more deadly and stronger bomb. ...read more.

Einstein sent to Franklin Roosevelt, the president of America at the time. Albert Einstein stated in 1996, "I made one great mistake in my life - when I signed the letter to President Roosevelt recommending that atom bombs be made, but there was some justification - the danger that the Germans would make them". Sixty-nine other scientist even wrote a protesting letter to President Truman, however, it was no use for $2 Billion dollars was spent to develop the Nuclear weapon and therefore obliged the American officials to use the atomic bomb even if the Geneva Convention law did not allow any biological weapons to be used in war. Jimmy Byrnes, Secretary of state appointed by President Harry Truman himself without consulting anyone stated, "We spent 2 billion dollars and we're going use it". The Manhattan project, however, was a 'secret project' and the decision to produce the atomic bomb was made not democratically at all. The project needed to be a secret to prevent other countries from developing the bomb as well. After constant battling throughout the three years between Pearl Harbour and the dropping of the atomic bombs, the Japanese were seen as weak because it was losing major military installments and any control of waters and skies, which meant the Americans, had total control of attacking high above anytime. ...read more.

"I realize the tragic significance of the atom bomb," President Harry Truman stated in a radio address before the Japanese government finally surrendered, "[but we] have used it in order to shorten the agony of war, in order to save the lives of thousands and thousands of young Americans". The Atomic bomb was unfortunately deadly successful in what it was aimed to do, which was ending World War two and to save American lives. General Groves, the Engineer Director of the Manhattan Project was desperate to see fruits of his labours before the end of the war. The cost to develop the bomb was $2 billion dollars was taken into great account as it would have been difficult to justify not using it after such a vast financial investment. The project produced 2 bombs, the one dropped on Nagasaki, however, was simply an unnecessary experiment to just try it out. So finally, I believe that the dropping of the first bomb was justified, however, the second dropping was not. (1721 words) Sources: GSCE modern world Text book - Ben Walsh. Modern world B - Mr. RJ Huggins. BBC history articles: 'Just a big bomb to end the war' by Daniel Snowman & 'Can the dropping of Hiroshima be justified?' by Lawrence Freedman and Gar Alperovitz. http://www.me.utexas.edu/~uer/manhattan/debates.html http://www.secondworldwar.co.uk/japs.html http://www.socialstudieshelp.com/Lesson_95_Notes.htm http://www.wikipedia.com http://www.eyewitnesstohistory.com/atomictest.htm http://www.gwu.edu/~nsarchiv/NSAEBB/NSAEBB162/index.htm http://library.thinkquest.org/C005852/rise.htm http://www.ww2pacific.com/surrnote.html http://www.dannen.com/decision/index.html http://inventors.about.com/od/astartinventions/a/atomic_bomb.htm ?? ?? ?? ?? Nabilah Hamid 11ct Candidate number: 2388 History coursework Jerudong International School ...read more.