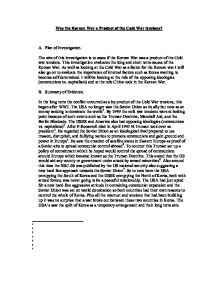 Was the Korean War a Product of the Cold War tensions?

Was the Korean War a Product of the Cold War tensions? A. Plan of Investigation. The aim of this investigation is to a***s if the Korean War was a product of the Cold war tensions. This investigation evaluates the long and short term causes of the Korean War. As well as looking at the Cold War as a factor for the Korean war I will also go on to evaluate the importance of internal factors such as Korea wanting to become self determined. I will be looking at the role of the opposing ideologies (communism vs. capitalism) and at the role China took in the Korean War. B. Summary of Evidence. In the long term the conflict occurred as a by-product of the Cold War tensions, this began after WW2. The USA no longer saw the Soviet Union as its ally but now as an enemy seeking to dominate the world1. By 1949 the cold war tensions were at boiling point because of such events such as the Truman Doctrine, Marshall Aid, and the Berlin Blockade. The USSR and America also had opposing ideologies (communism vs. capitalism)2. After F.Roosevelt died in April 1945 H.Truman took over as president3. He regarded the Soviet Union as an ideological rival prepared to use treason, disruption, and bullying tactics to promote communism and gain ground and power in Europe4. ...read more.

Callum MacDonald was a senior lecturer in history at the University of Warrick; therefore this gives us a neutral look on the Korean War being a product of Cold War tensions. However even though he is a neutral, as not from coming from a country to involved in the war, he may have a biased view towards this war. This is quite a valuable source because it talks about facts such as Korea and the Cold War, the eve of the War, if it was a limited war and the intervention of China into the war. This article was published over 10 years ago so it might be that new information about the Korean War has been discovered. This is also quite a limited article because it only talks about the fact that the Korean War was a product of the Cold War and doesn't discuss the Korean War further into that there may have been other internal factors contributing to the war. The Origins of the Korean War: Second Edition written by Peter Lowe is the next source I am evaluating. Unlike the first source this is an in-depth book on the origins of the Korean War looking both the social and political evolution of Korea and the policies and motivations of the major powers during the Cold War, he also looks at the importance of the influences of China and other countries into this war This is a quite reliable source because it takes many factors into account and discusses each one fully. ...read more.

Conclusion: From looking at all the causes of the Korean War I have come to the conclusion that the Korean War was a product of Cold War tensions. The Cold War by this time was at such a boiling point that any action or policy published by the USA or USSR would seem to be a direct threat to each other. By this time America were in full swing of their policy of containment to prevent the spread of communism by stopping any more spread of this communism into smaller countries such as Korea because the Americans believed in a domino theory18 that if this country fell into the hands of the communists so would the next and so on. So to have these two countries occupying different sides Korea was always going to cause problems. Even though there was two leaders of South and North Korea trying to untie the country in their own name they were puppets of the USSR and USA because Kim IL Sung was a communist and Syngman Rhee was capitalist so these two dictators would also be aware of the Cold War tensions and would not trust each other. So all the problems encountered in Korea ended up being related to the Cold War. 1 2 3 4 5 6 7 8 9 10 11 12 13 14 15 16 17 18 ?? ?? ?? ?? ...read more.