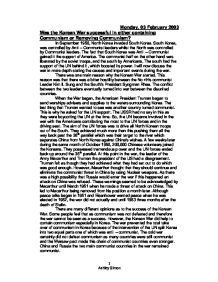 Monday, 03 February 2003 Was the Korean War successful in either containing Communism or Removing Communism? In September 1950, North Korea invaded South Korea. South Korea, was controlled by Anti - Communist leaders whilst the North was controlled by Communist leaders. The fact that South Korea was Anti - Communist gained it the support of America. The communist half on the other hand was liberated by the soviet troops, and the south by Americans. The south had the support of the UN behind it, which boosted its power. I will now discuss the war in more depth stating the causes and important events during the war. There was one main reason why the Korean War started. This reason was that there was a bitter hostility between the North's communist Leader Kim IL Sung and the South's President Syngman Rhee. ...read more.

A few weeks later during the same month of October 1950, 200,000 Chinese volunteers joined the Koreans. They possessed tremendous power and the UN forces ended back up around the 38th parallel. At this point in the war, the leader of the Army Macarthur and Truman the president of the US had a disagreement. Truman felt as though they had achieved what they had set out to do which was good enough. However, Macarthur thought that they should continue and eliminate the communist threat in China by using Nuclear weapons. As there was a high possibility that Russia would enter the war if this happened an attack on China was refused. These warnings seemed to be acknowledged by Macarthur until March 1951 when he made a threat of attack on China. ...read more.

China and Russia the two main communist countries in the war remained communist. I think the future US policy should be to continue to try to contain communism because by trying to defeat it they are putting most of the world on the brink of war. I also believe they should try to contain communism because they were more successful in containing communism than they were in defeating it. Containment does not necessarily mean any war but there is more chance of peace and agreement with containment. However, I also feel that if the evils of communism are as bad as they are made out to be then the aim should be to destroy it completely before it spreads. This is similar to the second world war when Russia who were controlled by communist were allies with the US because they felt that this extreme measure was necessary to defeat Hitler and his evil plans. 1 Ashley Simon ...read more.