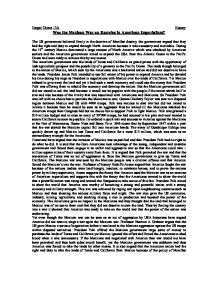 Was the Mexican War an Exercise in American Imperialism?

Harpal Chima 13A History Was the Mexican War an Exercise in American Imperialism? The US government believed firmly in the doctrine of Manifest destiny, the government argued that they had the right and duty to expand through North American because it was necessary and inevitable. During the 19th century Mexico dominated a large amount of North America which was inhabited by American settlers and the American government aimed to expand the USA from the Atlantic Ocean to the Pacific Ocean and were ready to achieve this by any means. The American government saw the lands of Texas and California as grand prizes with the opportunity of lush agricultural prospect and the possibility of a gateway to the Pacific Ocean. The lands though belonged to the nation of Mexico, which seen by the Americans was a backward nation and did not deserve to have the lands. President James Polk intended to use full extent of his power to expand America and he devoted his time during his reign as President in negotiations with Mexico over the lands of California. ...read more.

It is argued that Polk provoked the war and that the annexation of Texas was an act of aggression to force the Mexican government to give up Texas and California. The Mexican war was seen by the Mexican people was a criminal offence and that America forced the Mexican's into the war. Professor of history Rodolfo Acuna argued that America fought the war because of the nations leaders were land hungry, insolent, to celebrate heroes, and to prove the nations power by military superiority. Acuna supports the theory that America used the Mexican war as an exercise of American imperialism and supports this with the theory that the Americans wanted to show the world that a powerful nation was rising and wanted the Europeans to take notice of this fact. President Polk aimed to show the world that America was worthy of becoming a strong and powerful nation with a strong economy and military strength. This aim was achieved by raging war upon neighbouring countries such as Mexico and thus showing the nations military force and might. ...read more.

Grabner also states the fact that although America did claim war upon Mexico in 1846 it was not the US who fired the first shots, it was the Mexicans. Although it is said that the Mexicans were forced into the war the military was not forced to attack the American troops first and Polk had the right to do what he did because the Mexicans had attacked his country and in order to defend his nation he needed to attack Mexico. Thus it can be said that America did not force Mexico into war but Mexico forced America to war and thus America reacted to the Mexican aggression by taking the lands of California and Texas justly. Although it is easy to see that America did in some way force Mexico into a war the Mexicans did attack first and the Americans had the right to wage a war upon Mexico. Thus concluding the statement it can be said America did use the Mexican war to show off their military power and policy of Manifest Destiny and thus was an exercise in American imperialism. Yet it was the Mexicans who attacked first and who forced America to fight back thus the Mexican war was not an exercise in American imperialism but in American defence. ...read more.