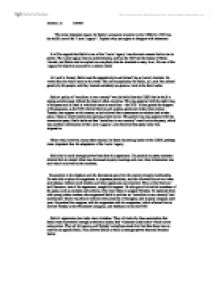 Was the most important reason for Stalin's accession to power in the USSR by 1929 his skilful use of the 'Lenin Legacy'?

'The most important reason for Stalin's accession to power in the USSR by 1929 was his skilful use of the 'Lenin Legacy''. Explain why you agree or disagree with statement. It will be argued that Stalin's use of the 'Lenin Legacy' was the main reason for his rise to power. The Lenin legacy was his achievements, such as the NEP and the treaty of Brest-Litovsk, and Stalin tried to explain to everybody that he intended to carry it on. His use of the Legacy did help him succeed to a certain extent. At Lenin's funeral, Stalin used the opportunity to set himself up as Lenin's disciple. He vowed that he would carry on his work. This led to popularity for Stalin, as Lenin was adored greatly by his people, and they wanted somebody as great as Lenin to be their leader. Stalin's policy of "socialism in one country" was his belief that the USSR had to build a strong socialist state without the help of other countries. ...read more.

This is why Zinoviev and Kamenev, two of his opponents, sought his support. He also got rid of radical members of the party, such as students and soldiers, who were likely to support Trotsky. He replaced them with young urban workers who supported Stalin's policies on "socialism in one country" and nationalism. Stalin was able to influence the selection of delegates sent to party congress each year. He packed the congress with his supporters with his supporters, which allowed him to outvote Trotsky at the Thirteenth Congress, and Bukharin to end the NEP. Stalin's opponents also made many mistakes. They all made the false assumption that Stalin wasn't powerful enough to become leader, that "Comrade Card-Index" would never seize power. They all felt secure, and Trotsky's aloofness made him feel that there was no need to act against Stalin. This allowed Stalin to build a stronger power base and become leader. In Lenin's Testament, Stalin was heavily criticised, while Trotsky and Bukharin were praised. ...read more.

Stalin tricked Trotsky into missing Lenin's funeral, which damaged Trotsky's reputation severely. In 1924 the left-wing contenders, Trotsky, Zinoviev, and Kamenev began to argue amongst themselves. Zinoviev and Kamenev launch a campaign against Trotsky and he decided to fight back. During this, Stalin watched the left-wing fall apart with great satisfaction, all the while pretending to want party unity in honour of Lenin. Once the left wing was out of the way, Stalin turned his attention to the right. In a shock twist, Stalin began to criticise the NEP and support industrialisation. Bukharin defended the NEP, but the Congress, now full of Stalin's supporters, sided with him. Bukharin was outvoted, and the NEP was swept aside. The right wing contenders Bukharin, Tomsky, and Rykov were ousted from their positions of power and Stalin was now the leader of the USSR. To conclude, it seems that Stalin's adaptation of the Lenin Legacy was not as crucial as his positions of power and his opponent's mistakes. However, it did gain him support in the early stages of the struggle over power, and allowed him to continue the building of his power base on his way to succeeding Lenin. Michael Lee 12/08/07 ...read more.