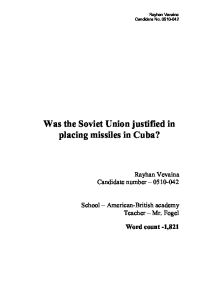 Was the Soviet Union justified in putting missiles in Cuba?

Was the Soviet Union justified in placing missiles in Cuba? Rayhan Vevaina Candidate number - 0510-042 School - American-British academy Teacher - Mr. Fogel Word count -1,821 Plan of investigation Subject of investigation Was the Soviet Union justified in placing missiles in Cuba? Methods used in investigation * Research on the origins of the Cuban Missile Crisis and why it was initiated. Information to be found on the internet and in text books written in different periods of time. * Watching videos and reading different books to find reasons on why the Soviets put missiles in Cuba and determine whether they were justified. Criteria: videos and books from different time periods and sources with different views about the crisis. * Evaluating two different sources with emphasis on origin, purpose, value and limitations. * Analysis of the sources determining the impact the crisis had on the cold war and whether the Soviets were justified in provoking it. * Bibliography of sources and information on the topic. Summary of evidence It was at the peak of the arms race between the Soviets and USA when the Cuban missile crisis unfolded. Before 1962, each country was doing its best to outdo the other in terms of weapons, bombs and space exploration. So when the Cuban missile crisis occurred, both countries wanted to show that they were more powerful and would not back down. To understand why the soviets put missiles in Cuba we need to know Khrushchev's position in the Soviet Union. ...read more.

The limitations of this source is that because it has been written by the Soviet foreign minister, some of the facts might not be entirely true as the Soviets were trying to defend their foreign policy in Cuba. Since the source is a private Soviet document, the facts could easily be biased towards the Soviet Union. The second source is secondary and gives a view of Kennedy's role in the missile crisis after more than 40 years since the incident. The source thinks that the Soviets were not justified in placing missiles in Cuba. The purpose of the source is to distance itself from the personal views of Kennedy in the crisis (in the 1960's Kennedy was commended on his handling of the situation but in the 1970's and 80's he is seen as reckless and dangerous) and talks about the crisis in its historical context. The author claims that the president had a 'remarkably open view of the Russians' and that the Soviet leader Khrishchev was unpredictable and was at fault for almost starting a nuclear war. The source praises Kennedy's handling of the cuban missile crisis. The value of the source is that because it was written so many years after the crisis, it gives an argument on the Cuban missile crisis looking back through time. At the time of the crisis, sources from the US and the USSR would be written to make their own side look as if they came out a winner but this sources looks past all the biases and sees things in a historical sense. ...read more.

'We were eyeball to eyeball and the other side blinked' - Dean Rusk US Secretary of State. (Timewatch - Missile Crisis) Deals between the two countries were made and Missiles in Cuba were to be exchanged with missiles in turkey and the US could never invade Cuba. The Cuban missile crisis opened up communication between the two sides. Both superpowers realized they had come so close to nuclear war because of lack of communication. Therefore a hotline to the Kremlin and the white house was put to further improve relations. However Khrushchev being the one to back down was seen as weak and therefore lost his position in the Soviet Union. Khrushchev's strategy was very risky and almost caused a nuclear war, but many historians differ as to whether or not he was justified in placing missiles in Cuba. Word count -1,821 List of sources Bennet, Jeremy. Timewatch - Missile Crisis. BBC TV Production. Cable of Andrei Gromyko's meeting with President Kennedy. Obtained by NHK. Provided to Cold War International History Project. National Security Archive. Washington, D.C..Translation by Vladimir Zaemsky. CNN Productions. 1998. Cold War - Volume 4. Warner Home Video. California Kennedy, Robert. 1969. Thirteen Days: A Memoir of the Cuban Missile Crisis. New American Library. New York Khrushchev, Nikita. 1970. Khrushchev Remembers. Little Brown & Company. Boston Lowe, Norman. 1988. Mastering Modern World History. Macmillan Master Series. London. Walsh, Ben. 1996. Gcse modern world history. John Murray. London. Weisbrot, Robert. 2002. Maximum Danger: Kennedy, the Missiles, and the Crisis of American Confidence. Ivan R. Dee Publisher. Chicago ?? ?? ?? ?? Rayhan Vevaina Candidate No. 0510-042 1 Rayhan Vevaina Candidate No. 0510-042 Rayhan Vevaina Candidate No. 0510-042 ...read more.