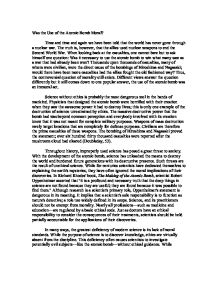 Was the Use of the Atomic b**b Moral?

Was the Use of the Atomic b**b Moral? Time and time and again we have been told that the world has never gone through a nuclear war. The truth is, however, that the allies used nuclear weapons to end the Second World War. When looking back at the casualties, one cannot bare but to ask himself one question: Was it necessary to use the atomic b**b to win what many saw as a war that had already been won? Thousands upon thousands of casualties, many of whom were civilian, were the direct cause of the bombings of Hiroshima and Nagasaki; would there have been more casualties had the allies fought the old fashioned way? Thus, the controversial question of morality still exists. Different views answer the question differently but it still comes down to one popular answer, the use of the atomic b**b was an immoral act. Science without ethics is probably the most dangerous tool in the hands of mankind. Physicists that designed the atomic b**b were horrified with their creation when they saw the awesome power it had to destroy lives; this is only one example of the destruction of science unrestrained by ethics. The massive destructive power that the b**b had was beyond common perception and everybody involved with its creation knew that it was not meant for complete military purposes. Weapons of mass destruction rarely target locations that are completely for defense purposes. ...read more.

This premise paradoxically sanctions the use of killing as a means of preserving life. Science is used to introduce new and im moral mechanisms which are historically permanent and intensify violence. Human talents that could have improved humanity are abandoned for more violent pursuits. In this capacity, scientists use their skills to destroy their brothers, convincing themselves that their efforts are humanitarian. The creators of the gasses, "like bargain hunters, imagined they were spending a pittance of tens of thousands of lives to save a purseful more" (Rhodes, 95). Using science this way for the preservation of life is morally bankrupt; human lives are not guaranteed. Every time a scientific development-such as gassing-is used to kill more efficiently, a destructive precedent is established for future generations to supersede. Thus, the nature of science is perverted, establishing a new standard of human cruelty; ironically, the occupation that discovers cures for illness also develops methods of mass destruction. Despite ethical obligations, scientists should not be held responsible for every application of their work because they cannot predict the future. Ethical responsibilities do not obligate a scientist to improve society but to at least morally question his work. It is when deliberate research is conducted for destructive purposes and rationalized as humanitarian that great dilemmas arise. Historically, the destruction during WWI established a precedent for using atomic weapons and saturation bombing in World War II. ...read more.

Edward Teller, a Senior Research Fellow at the Hoover Institution and physicist most widely known for his contributions to the first demonstration of thermonuclear energy maintains that the atomic b**b was put to good and moral use on Japan. Teller maintains that "Science considers what is true, starting out with almost unimaginable ideas" (Teller 23). Thus, the job of science is to put ideas together in a large and logical pattern. Therefore, it is the job of the politicians to decide whether science can be put to good use. Raised as an anti-Communist, he saw what many politicians saw, that nuclear weapons were useful in deterring enemy aggression. Could this same argument have been applicable to the Japanese situation? Teller states that: "The developed nations have paid a great price in terms of their national resources in their strenuous effort to protect life, to safeguard peace. They displayed sufficient wisdom to overcome the traditional inclinations toward military solutions of world problems. This has happened for the first time. And it has provided an abiding pattern to apply new, peaceful and joint approaches to solving the most acute world problems. For the first time in world history, the most powerful weapons ever created were not used. Instead, they became an instrument of human experience, the means of great discoveries, and the tool of deep penetration into the secrets of Nature. We trust it will henceforth and forever take its deserved place among the sophisticated tools of enlightened generations" (Teller 28). ...read more.