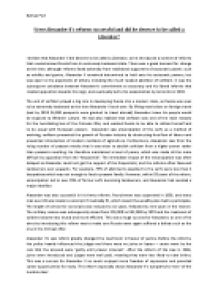 Were Alexander IIs reforms successful and did he deserve to be called a Liberator?

﻿Bethan Port Were Alexander II?s reforms successful and did he deserve to be called a Liberator? I believe that Alexander II did deserve to be called a Liberator, as he introduced a number of reforms that revolutionised Russia from its extremely backward state. There was a great demand for change at the time, although reforms faced adversity from traditional supporters of autocratic power, such as nobility and gentry. Alexander II remained determined to hold onto his autocratic powers, but was open to the arguments of others; including the much needed abolition of serfdom. It was the subsequent unbalance between Alexander?s commitment to autocracy and his liberal reforms that created opposition towards his reign, and eventually led to his assassination by terrorists in 1881. ...read more.

He therefore maintained a level of peace, which was made all the more difficult by opposition from the ?Krepostniki?. The immediate impact of the emancipation was often delayed as Alexander could not get the support of the Krepostniki, and the reforms often favoured landowners over peasants. For example, 75% of allotments awarded to the serfs were less than 4 dessyatinas which was not enough to feed a peasant family. However, within 20 years of the reform, emancipation led to over 85% of former serfs becoming landowners, and Alexander had avoided a major rebellion. Alexander was also successful in his Army reforms. Recruitment was suspended in 1856, and every man over 20 was made to conscript if medically fit, which meant the wealthy also had to participate. ...read more.

This was a success for Alexander II as courts enjoyed more freedom of expression and provided career opportunities for many. This reform especially shows Alexander II?s sympathy for men ?of the humble class?. In conclusion, I think that Alexander II does deserve to be called a liberator as ultimately his reforms were a huge success; 40 million Russians were liberated overnight and Russia?s social and economic state radically improved to compete with the level of change occurring in Europe. Furthermore, Alexander II?s other reforms, such as in law and the army replaced the previous lifestyle that serfdom enforced, in order to support his tsarist system of government that he wanted to retain. Alexander II?s reforms aimed to make his country strong again and this is, to a degree, what he managed to achieve. ...read more.