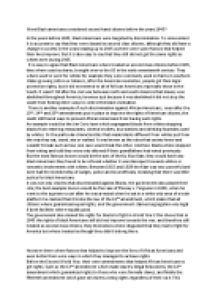 Were Black Americans considered second class citizens before the years 1945?

﻿Were Black americans considered second hand citizens before the years 1945? In the years before 1945, black Americans were targeted by discrimination. To some extent it is accurate to say that they were classed as second class citizens, although they did have a change in society in the years leading up to 1945 as there were some factors that helped their lives improve. But it is also easy to say that they still did not get the same rights as whites even during 1945. It is easy to agree that Black Americans where treated as second class citizens before 1945, they where used as slaves, brought over to the US in the early seventeenth century. They where used to work for whites for example they were commonly used on farms in southern states growing cotton or tobacco, after the American revolution, people got their legal protection rights, but it did not extend to all of African Americans especially those in the South. It wasn?t till after the civil war between north and south America that slavery was abolished throughout America, however just because it was abolished it did not stop the south from finding other ways to control the black civilisation. ...read more.

It was not only citizens that discriminated against Blacks, the government also played their role; the best example known would be the case of Plessey v. Ferguson in 1896, when he went to the supreme court after he was arrested when he sat in a white only area of a train platform he claimed that it broke the law of the 14th amendment, which states that all citizens where guaranteed equal rights, and the government claimed segregation was legal if both facilities where equally good. The government also denied the rights for blacks to fight in World War 2 this shows that in 1945 the rights of black Americans still did not improve towards the war, and therefore still treated as second class citizens, they themselves where disgusted that they had to fight for America but where treated as though they didn?t belong there. However there where factors that helped to improve the lives of African Americans and even better their were ways in which they managed to achieve rights. Before the Second World War, their were amendments that helped African Americans to get rights. ...read more.

After the first day when we saw how they fought I changed my mind. They are just like any of the other boys.? From this statement it could be suggested that when the war was ended people from the south had a different view of blacks from the war effort and may give them the rights they deserve. During the war Jobs opened up for the black citizens of America, they were able to work in factories thanks to Black Activist Phillip Randolph who threatened Roosevelt that he would lead a march of African Americans through Washington, Roosevelt then issued a consecutive order to allow fairness, and it allowed black Americans to work for the war effort. This moved another wave of migration to the north for southern blacks. It is hard to say how much the idea of Black Americans being second class citizens moved on, and it can be argued that it didn?t improve for African Americans because their was still discrimination after the second world war, however their were improvements to the lives of black citizens that made an effort to lose the idea, and it would be hard to say that they were still seen as Second class citizens because there were different factors that went against the idea. ...read more.