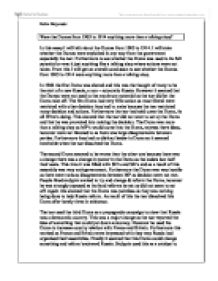 This time it was filled with SD's and SR's and as a result of this assembly was very anti-government. Furthermore the Duma was very hostile as there were various disagreements between MP as decision were not met. People liked stolypin wanted to try and change & reform the Duma, however he was strongly opposed as the land reforms he set up did not seem to set off. Again this showed that the Duma was pointless as they was nothing being done to help Russia reform. As result of this the tsar dissolved this Duma after barely three in existence. The tsar used the third Duma as a propaganda campaign to show that Russia was a democratic country. This was a major change as the tsar reported the idea of something that could put down autocracy. ...read more.

This was due to because the death of stolypin. He was the only reform setting out to reform Russia but was killed. The Duma lost a leader and a result of this lacked political imagination. Furthermore there were various political strikes and it showed the government was losing it. It was going back to itself no imagination, no reform hence no change. Overall in my opinion I believe the Duma from 1905 to 1914 was anything more than a talking shop. I say this because the Duma wasn't used to its full potential as it should have done as the tsar played around with the Duma as if they were puppets. Furthermore a political reformer such as stolypin was not allowed to help reform Russia as he was killed off. The Duma had no political backing and seemed to be more of a show than a political stamp. In conclusion the Duma could have worked if they tsar did not interfere. Robin Mojumder ...read more.