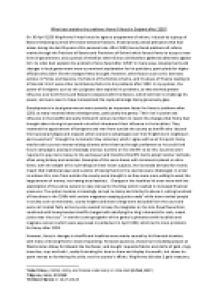 What best explains the problems Henry III faced in England after 1258?

Transfer-Encoding: chunked ﻿What best explains the problems Henry III faced in England after 1258? On 30 April 1258 King Henry III was forced to agree a programme of reform, induced by a group of Barons following a period of tension between factions, financial and judicial grievances that had arisen during the last 24 years of his personal rule. After 1258, Henry faced problems of reform, mainly through the Petitions of Barons and Provisions of Oxford which forced Henry to accept a new form of government, and a period of rebellion where Simon de Montfort gathered adherents against him. So what best explains the problems Henry faced after 1258? In many ways, developments and changes in local government were a prominent explanation for his problems, particularly for higher officials who didn?t like the changes Henry brought. However, other factors such as his overseas policies in Poitou and Gascony, the failure of the Sicilian scheme, and his abuse of finance leading to a financial ?crisis? were other contributory factors to his problems after 1258. In my opinion, the power of foreigners such as the Lusignans best explains his problems, as they exerted greater influence over both Henry and Edward compared with the Barons, which led them to challenge his power, and were seen to have monopolised the royal patronage Henry generously gave. ...read more.

He was also slow in paying debts[6]. As a consequence, the country was under increasing pressure and the government, in the view of many summoned to parliament was unable to cope, leading to barons and others uniting up against him to gain control of this situation. Then again, it were his overseas policies in Poitou, Gascony and Sicily which caused a lot of this economic stress, abuse of finance and a rise in tension between certain barons such as Montfort and Henry. The failure of the Sicilian scheme which aimed to oust the present incumbent King of Sicily so he would be able to contain French power, and the resultant threats from the Papacy of excommunication and an Interdict, unless the Papacy was paid for the cost of the enterprise so far, were evidence for many that Henry was foolish and reckless. However, it is unlikely that the Sicilian affair would have provoked the Barons in 1258 as the security of the realm was never in danger. However, Henry?s overseas policies had made the regime unpopular. The King had been unable to regain the lost lands in France, largely because he lacked the financial resources to raise a sufficient force to mount a campaign and dare not call parliament to ask for funds as they would have used it as an opportunity to criticize him. ...read more.

gentry and the clergy and annoyed the Barons to a point, it were Henry?s ?alien? advisors and allies such as the Lusignans who best explain his problems after 1258, as Henry?s close relations with the Lusignans and even the Savoyards set the image in their minds that they could not trust this man as their King, as he alienated the Barons by authorising high powered positions for the Savoyards and Lusignans, giving them some of the most strategic castles in England. Therefore I believe that the ?aliens? and Henry?s foreigner relations best explain his problems after 1258, as his problems of reform and rebellion all started because of the Barons meeting at 1258, which was ultimately caused by Henry?s alien relations being better than his baronial relations. ________________ [1]Robert Stacey, Politics, Policy, and Finance Under Henry III 1216-1245 (Oxford, 1987). [2]Ridgeway, Henry III: ODNB [3]Petition of Barons Cl. 16,17 and 28 [4] Benjamin L. Wilde, Royal finance under King Henry III, 1216?72: The Wardrobe Evidence (2012) [5] The Personal Rule of Henry III, 1234-1258 [6] Petition of Barons Cl. 22 and 23 [7] Huw Ridgeway, ?King Henry III and the ?Aliens? 1236-1272,? in Thirteenth Century England II: Proceedings of the Newcastle Upon Tyne Conference 1987 [8] I. J. Sanders, Documents of the Baronial Movement of Reform and Rebellion 1258-1267, (Oxford, 1973) [9] Provisions of Oxford, Cl. 20 ...read more.